I’m very pleased to welcome CT (aka Rhizowen) of Radix to my blog for a one off chance to get his take on the Cornish foodie scene. 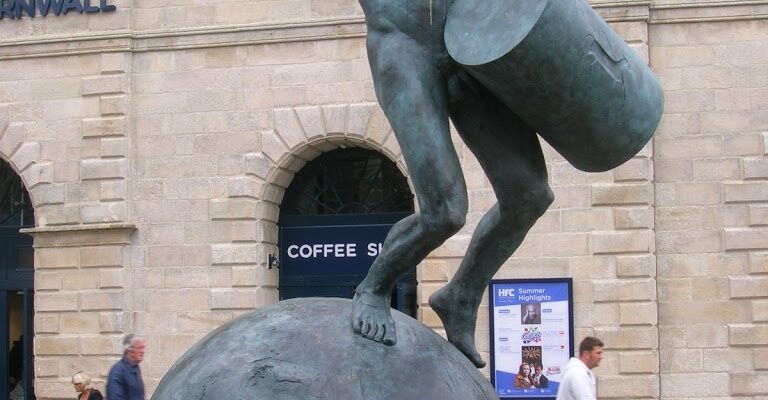 When Choclette suggested that I accompany her on a trip to Truro for the Cornwall Food and Drink Festival,  I jumped at the opportunity. I knew from past experience that all the free samples in themselves probably constituted a meal.  Could it be that Mrs Thatcher was wrong and that, in Cornwall at least, there is such a thing as a free lunch?

Walking down to Lemon Quay (how appropriate is that?) I could detect the first hints of Cornish mist descending. No matter, the event was located in a marquee so the weather could do its worst and we’d still remain dry. As we approached, we were greeted by this statue. The old song The Little Drummer Boy immediately came to mind; on closer inspection “little” was perhaps a misnomer for this – how shall I put it – larger than life character. As an old-timer passing by said to Choclette: “don’t look at ‘e, t’is likely your eyes’ll drop out”.

The marquee was bustling and it was a case of going with the flow as best one could and then exiting for a few moments to talk to the exhibitors. That and get stuck into the free samples.

Artisan breads were represented by Baker Tom and Vicky’s Bread, both well known locally for the quality of their baked goods.

Here’s the world’s best cheese – apparently. At least it was in 2010 and I can attest to the fact Cornish Blue still tastes pretty fine.

And this is a local speciality – Yarg, a cheese wrapped in nettles. It’s a fun idea and tastes delicious. The fun doesn’t extend quite so far if you’re the one  picking the nettles though. Like the Cornish Blue, it was originally developed on the edge of Bodmin Moor, close to where Choclette grew up. I’m not, by the way, suggesting that she grew up in a cowshed. Come to think of it though, she did!

All that bread and cheese naturally requires chutney. The ones from Crellow really hit the spot – they were excellent.  I was particularly taken by the tomato jam and the fig and lemon versions;  I spooned out perhaps a little more than I deserved onto the accompanying crackers.

This is the chocolate lady, Nicky Grant, or rather one of her classically inspired creations. But who, when all is said and done, wants to feast their eyes on a marble torso when they can devour a chocolate counterpart? That could explain the missing bits: maybe some lucky soul had already bitten off her head and limbs.

Nicky, who does actually feature in the background, similarly cropped, works with her husband and is a pukka chocolatier, producing some very fine chocolates.

I can attest to this fact, as we got to try some of her award winning fennel and ginger truffles. As I drooled, Choclette discussed the arcane world of dry caramel preparation, tempering and other such niceties. Each to their own.

For some strange reason, nettles featured at the festival more than once: here’s Cornish Stingers Nettle Beer. This caused quite a furore when the dead hand of EU bureaucracy threatened the producers with closure. Put it this way: when is a beer not a beer? Answer: when it’s made with nettles. And no malt. That makes it a wine.  And here’s your £10,000 tax bill. I’m not entirely sure how this stand off was resolved, but they’re still brewing this, er, alcoholic beverage.

I was also interested to see the display of sea vegetables, one of the mainstays of the oh-so-trendy forager’s diet. The sea purslane and sea spinach are quite tasty; the rock samphire is more of a flavouring or condiment than a salad.

If all that greenery seems a little worthy, biscuits too were available – Cornish fairings, clotted cream shortbreads and also saffron cake – all from Simply Cornish.  I’ll resist cliches about hot cakes and let this picture speak for itself.

Outside the marquee, the street market was in full swing. I couldn’t resist buying another local speciality – some daffodil bulbs. The fields of West Cornwall are quite a sight when they are in bloom.

I’m about as annoying and persistent as a wasp when the opportunity to sample some honey is available.  In this case it was worth it: Gwenen Apiaries heather honey was truly exquisite. I also had an interesting chat with Carole Dewhurst, who with her husband Rodger, run Gwenen.  Not only do they produce honey – Rodger is also a bee breeder, who is developing strains of bee adapted to the Cornish climate. Talking of the climate, it was now raining hard, so I decided to keep the camera under wraps, hence the lack of pictures. Apparently some of Rodger’s bees show signs of resistance to varroa infestations. They have developed the habit of biting off the mites rather than allowing them to cling on. This behaviour coincidentally makes them keener to nip the beekeeper rather than sting.  Fascinating – now if only he can get the money to carry out further research. Listen up potential benefactors!

After our second go round the marquee, we opted to escape the crowds and headed off with a considerable weight of purchased produce, to Chantek for lunch, where you can get some tasty oriental food at a very reasonable price.

Following lunch we toured the town before dropping into the award winning Charlotte’s Tea House. We had passed many times before, but never ventured in.    As the Cornish mist had by now transformed in to proper rain, we thought it an opportune moment to try it out. The tea house is located upstairs and entering it is like passing through a portal in the space-time continuum as you climb the stairs past books and household items from times gone by. At the top of the stairs you are greeted by waitresses in Nippy style uniforms who invite you to be seated – all very retro and enjoyable. The tea was very good too.  And this meringue, with a generous dollop of appellation controlee clotted cream went down very nicely. From our window seat we could see the umbrella wielding shoppers bustling across Boscawen Street – a scene not unlike Renoir’s painting Les Parapluies.

Suitably replete, we descended the stairs and headed home, after a thoroughly enjoyable visit. So although Lincolnshire won in the British Favourite Food Spot 2011 competition  and I’m too polite to say “fix”, I think Cornwall can give a fairly good account of itself in the foodie stakes.