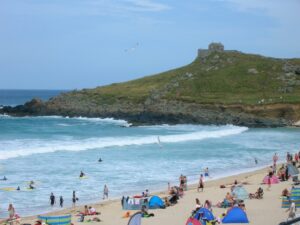 Not having visited St Ives for at least four years, I thought it was about time we renewed our acquaintance. It was my birthday and “I’ll do what I want to” – that was my line of reasoning and I did have the day off work booked anyway. I dragged CT along with me and we boarded the train westwards. Parking in St Ives is a bit of a nightmare and taking the train is the most sensible option on all counts – it’s a lovely ride.

In my naivety, I had assumed a midweek visit before the school holidays would be fairly quiet. How wrong I was, the place was heaving – note to self: remember this for next year. We tried to make the best of it and as is usual, in honey pots like this one, we managed to find a few tranquil spots.

As a local, it’s easy to forget how beautiful this county is, so making irregular pilgrimages to the more scenic spots is a good reminder. St Ives is a typical fishing village with narrow streets and small cottages perched on rocky slopes with the ocean an ever present force. On this particular day, thankfully, the weather was kind, so the sea was blue and the beaches looked particularly inviting.
Having disembarked at the station, we followed the throng through the maze of streets. Buskers, punters and shops provided us with entertainment. The real highlight for me, was, cue fanfare, a chocolate shop offering its own artisan chocolates – I Should Coco. As it was my birthday, I felt no compunction whatsoever in treating myself to some of the gorgeous looking creations within.

Gorge, I have to confess, is exactly what we did. Unfortunately, the pristine designs became rather smudged with cocoa powder from the chilli truffle which I could not resist, so the only picture I actually took was not a particularly pretty sight and hence, does not appear here. Luckily, the taste was not affected and they were truly excellent. I will, however, be reviewing some of these chocolates in a later post, so pictures will be available then.

Amazingly, we later came across another chocolate shop, Chocolat St Ives which included an interesting selection of baking bits and bobs. Sad, but true, we’d had enough of chocolate by this stage, so we looked but didn’t purchase.

St Ives is, of course, more famous for its artists than its chocolate. This time, we gave the Tate a miss, but spent some time at the Barbara Hepworth Museum and Garden instead. This was her studio for the last 25 years of her life and her sculptures are displayed both inside and out. They are truly wonderful – they have such a tactile look about them, I just wanted to go and touch every single one.

After a brisk stroll along the sea-front and a paddle in the sea, our interest in chocolate had returned. Tea and brownies at the Digey Food Room satisfied this need. There was a wide range of Teapigs to choose from and the brownies were really good. This gave us the energy to puff up the hill to the station and on to the train home. A long, but satisfying day out.
Previous Post: « Pineapple Upside Down Cake – a chocolate version of course
Next Post: Cornish Chocolates: I Should Coco & Nicky Grant »