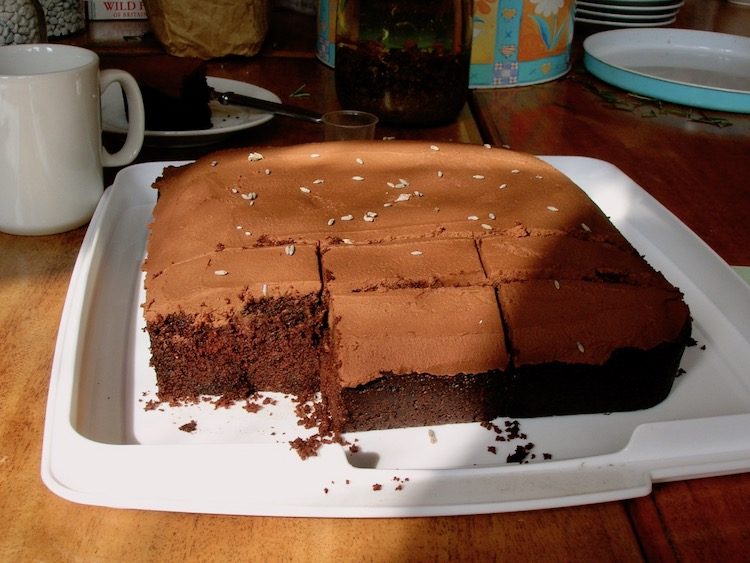 This deep and luscious chocolate lavender cake is perfect for feeding a crowd. It’s light in texture, has a subtle floral tone and keeps its shape well when cut into pieces. The icing on the cake is a delicious and tangy one. It’s made with chocolate and yoghurt.

I’ve been trying to organise a herbal medicine course for some considerable time now. It’s been touch and go, but it looks as though it will be going ahead tomorrow – crosses fingers and toes. The original date was back in January, but it had to be cancelled as the medical herbalist was ill. It’s a day course and for lunch we are all bringing food to share, so of course I’m bringing cake!

A while back, I spotted this chocolate slab cake over at Celia’s wonderful blog, Fig Jam & Lime Cordial. It looked to be just the thing for feeding a crowd, although I’m not sure 14 of us really constituted a crowd. A Forkful of Spaghetti wondered if I was making a herbal cake, given I was going on a herbal course. Now why didn’t I think of that? As soon as she asked the question, I knew immediately I would use lavender. I’ve been wanting to make a cake using lavender for ages, but haven’t yet found the opportunity – until now.

All I really needed to do, was to substitute lavender for the vanilla extract stated in the original recipe. And naturally I made a few other adjustments whilst I was at it.

The course did indeed go ahead, which was lucky in view of this rather large slab cake of Celia’s I’d made! It went down a storm amongst the course participants – the course and the cake. The lavender touch was appreciated too. Not having used lavender before in baking I was a little concerned the flavour might be either overwhelming or obscured by the chocolate. But oh, I managed to get it just right. Everyone could taste the lavender, but it was by no means overpowering. 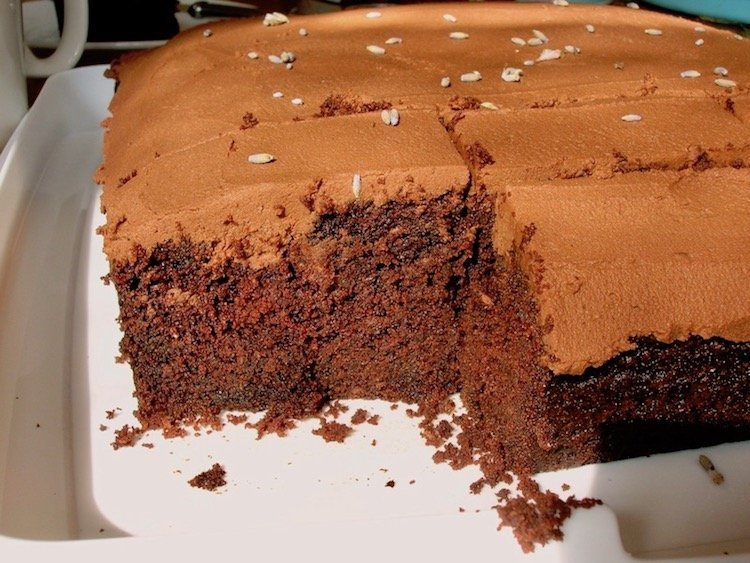 The cake rose well. It was light and moist but also firm enough so that, when cut, the pieces stayed together. The cake was topped off nicely by the tangy chocolate and yoghurt icing. All agreed this was completely delicious and it demonstrated that lavender has culinary as well as medical applications. If ever a chocolate cake was needed to feed a crowd, this has to be the one. The only thing I’d have done differently, if I’d had the option, was to use a deeper cake tin. I didn’t have one. Luckily the chocolate lavender cake rose just enough not to spill out over the sides of my 9″ sq silicone mould.

Thanks for visiting Tin and Thyme. If you make this luscious chocolate lavender cake, I’d love to hear about it in the comments below or via social media. Do share photos on your preferred social media site and use the hashtag #tinandthyme, so I can spot them. For more delicious and nutritious recipes, follow me on Twitter, Facebook, Instagram or Pinterest. 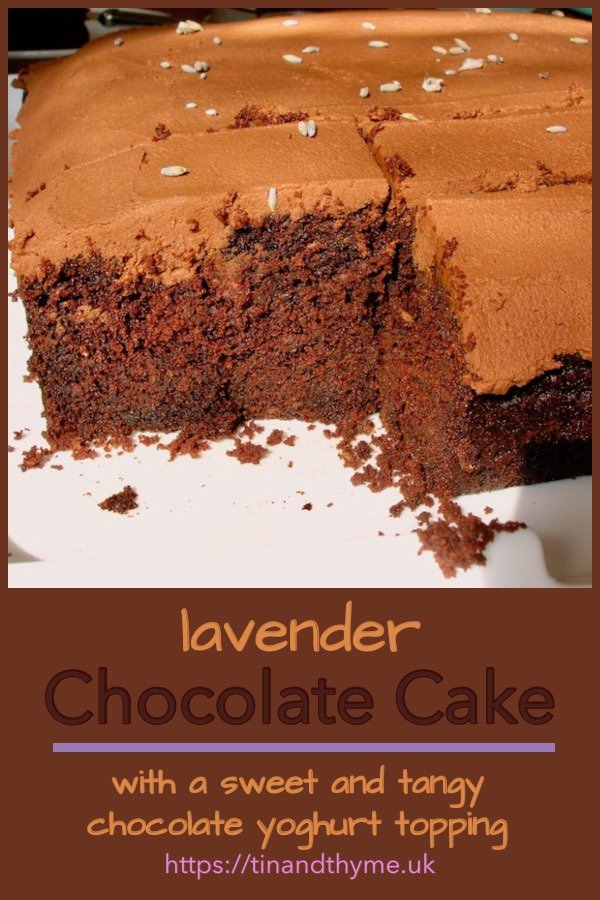 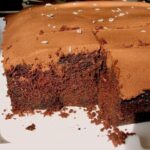