Paul A Young has long been on my radar as a chocolatier; he’s at the forefront of discovering and creating new flavours and new ways of working with chocolate. Recently he has joined a very select band of UK bean to bar producers, but typically makes his in a rather different way. I bought his book, Adventures with Chocolate, almost as soon as it came out in 2009 and it has been dipped into with anticipation on many an occasion. I’ve really enjoyed the recipes I’ve made from it, especially the dairy free sesame truffles. Until now, however, I have not tried any of his award winning chocolates or even his famous brownies. 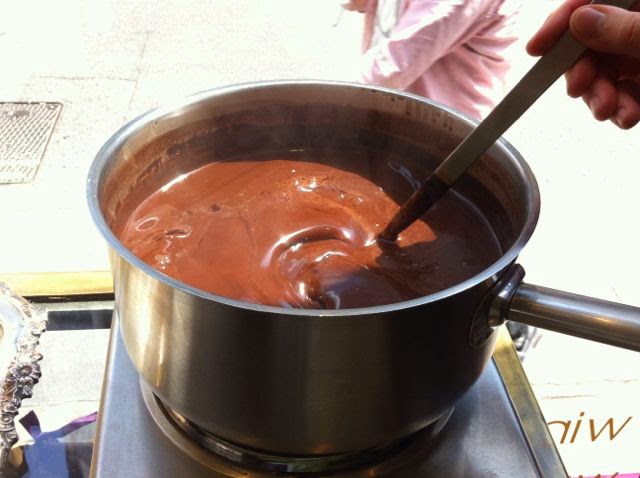 On my trip up to London the week before last, I called in at the new (ish) Paul A Young store on Wardour Street in Soho. I’m really into the colour purple at the moment and what did I see but a shop front decked out in elegant purple. Paul’s chocolate boxes are in the same shade of purple as are his bags, labels and other paraphenalia. I got a little breathy. I gazed in at the shop window, feasting on the magnificence within. My heart started beating a little faster. When I finally opened the shop door, I was hit with a powerful aroma of rich luxurious chocolate that was in itself quite intoxicating. I almost, but not quite, didn’t need anything else. The interior was a complete pleasure house of chocolate sensations and it was hard to know what to look at first: the chocolates spread out on a large round table in the middle of the room, the books or the fun decor. All I can say is that I was not disappointed. I spent some time there having a good look around.  The considerate assistant gave me some of the hot chocolate which was steaming away in a pan on the side. This is offered as a takeaway service. It was thick, rich, luxurious and delicious – a meal in itself. 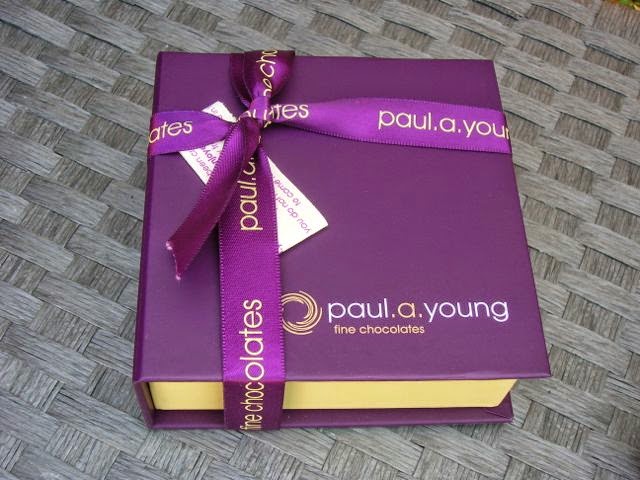 Whilst I supped on my hot chocolate, I had a good chat with Genevieve and Sarah from Nudge PR who filled me in on some of the background to Paul A Young and his business. They also gave me a box of chocolates and a brownie to take home with me – I couldn’t wait. 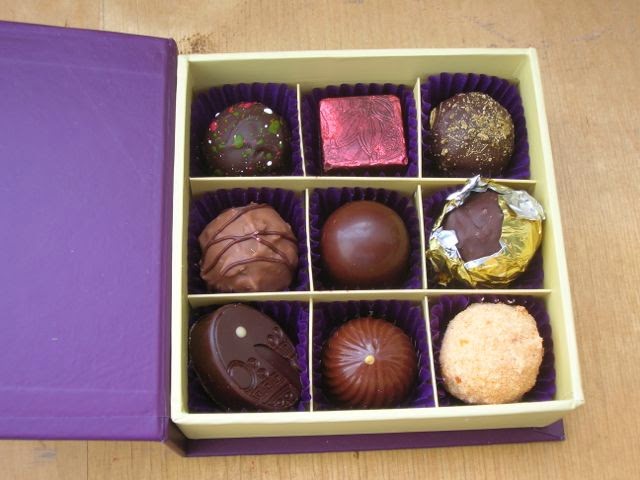 As it happened, my first day home was a fast day and the next was full of frantic activity, so I didn’t get to open that beautiful box for three days after I was given it. Talk about delayed gratification. The excitement just kept on building. When I finally opened it I was near to desperation. The scent of good quality chocolate emanating from the box took me straight back to the shop. After my initial euphoria was over, I took a look. Oh, how lucky was I? The one chocolate I had really wanted to try (apart from the salted caramel of course) was the Rhubarb and Pink Peppercorn and there it was nestling in the box – oh joy! 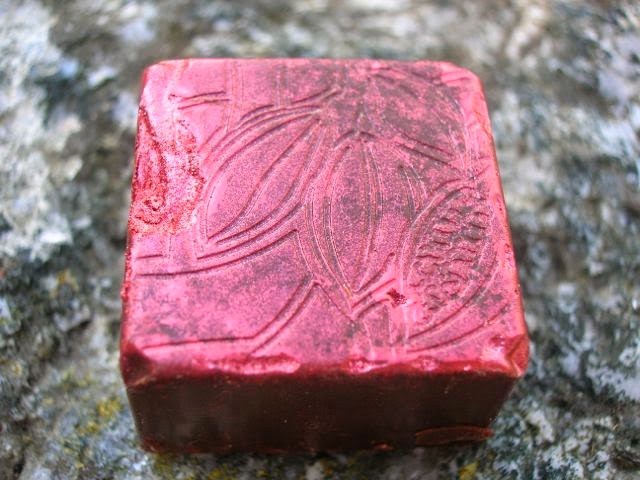 Rhubarb & Pink Pepper Caramel was as delicious as I thought it might be. Rhubarb is one of my favourite fruit flavours and there was no mistaking the real thing used here. The pink peppercorn, being quite a delicate pepper, did not overwhelm the rhubarb at all, but came in as a subtle aftertaste which I really liked. The enrobing dark chocolate was rich and powerful and lingered on in the mouth for quite some time. My only quibble with this was that the caramel was very runny and as I bit into it, half of it ran down my chin. 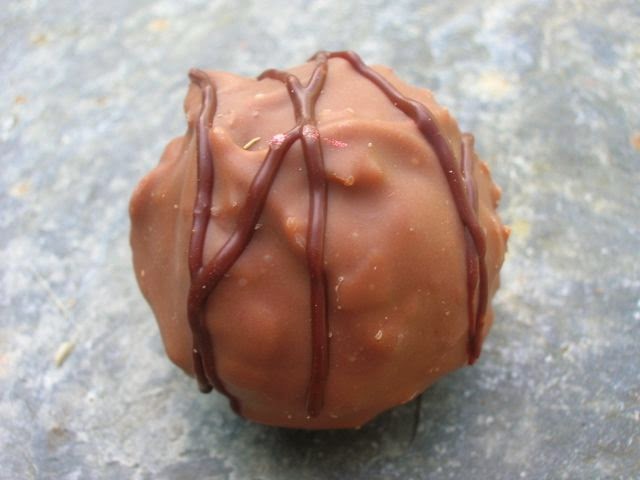 Treacle Tart was another one that had grabbed my attention in the shop, so I was very pleased to see it had made its way into my little box of chocolates. This was a fudgy ganache covered in milk chocolate with tiny pieces of something crunchy. The flavour was most definitely that of a good treacle tart. I don’t know how Paul has done it, but what an ingenious invention. Whereas the rhubarb was a chocolate to be savoured, this one just left me wanting more. 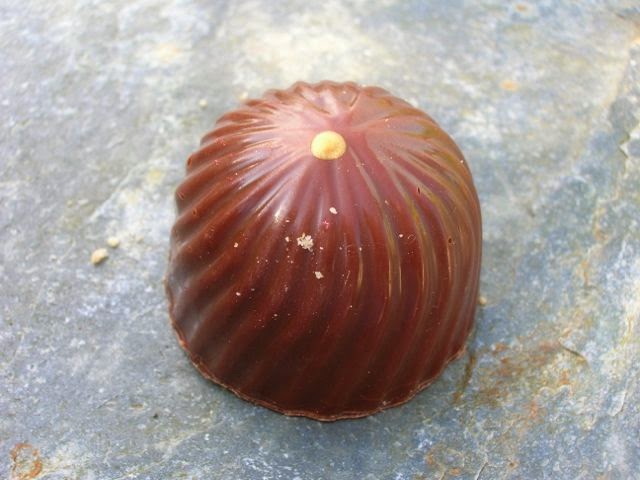 Passion Fruit Curd sounded a bit different and another one I was keen to try. To be honest, I was keen to try them all. One of the best fruit curds I’ve ever made was passionfruit curd, it has such a unique and zingy flavour and reminds me of good times spent in Australia. I’ve tasted several passion fruit chocolates now and have found they are very hard to pull off. Most I’ve tried have tasted artificial and really rather unpleasant. But a good one, using the real fruit, can be hard to beat. This one certainly didn’t disappoint: the fresh vibrant flavour came through. The primrose yellow curd was soft but not runny. I was a bit unsure about the milk chocolate that encased it. It had a very distinct and robust flavour which certainly made a contrast to the passionfruit, but I would have preferred something milder that allowed me to really savour the fruit. Interestingly, both flavours lingered equally on the palate long after the chocolate had disappeared. 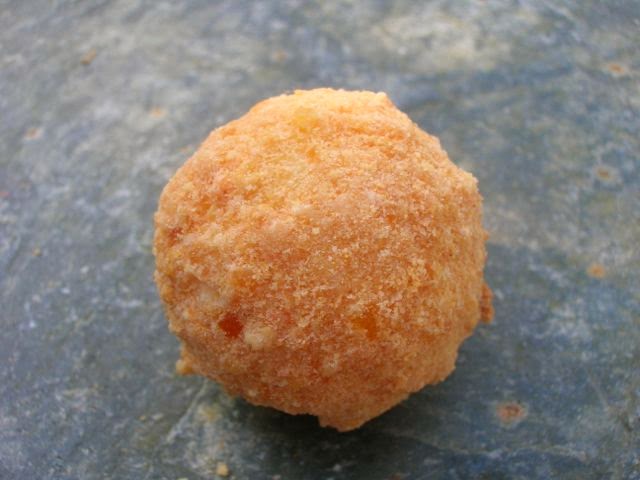 Battenburg Cake Truffle sounded intriguing. Was it going to look like a Battenburg inside I wondered? No it didn’t, but it tasted like one. A white chocolate shell covered in what seemed to be fine cake crumbs and holding a marzipanny white chocolate ganache that tasted of both marzipan and vanilla cake. Very clever, very nice. 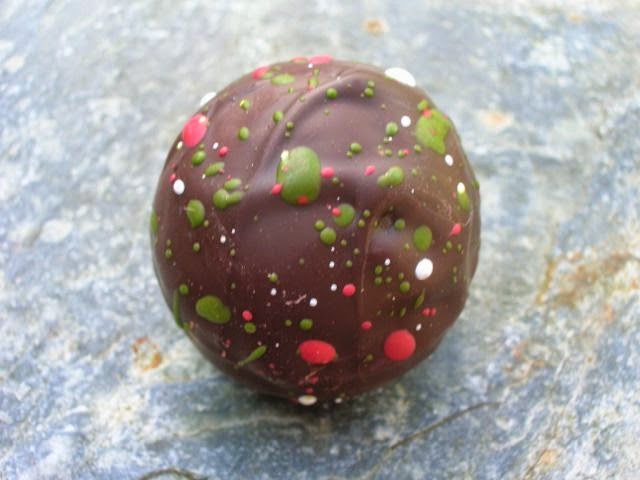 Pimms Cocktail sounded perfect for the warm weather we have finally been getting. A dark chocolate shell, decorated with green and red to represent cucumber and strawberry, I’m guessing. One of the many things I like about these chocolates is that they keeps you guessing. What was going to be inside this one I wandered. Oh clever. This was a chocolate ganache that tasted of cucumber and most definitely of Pimms. No mistaking the alcohol there. 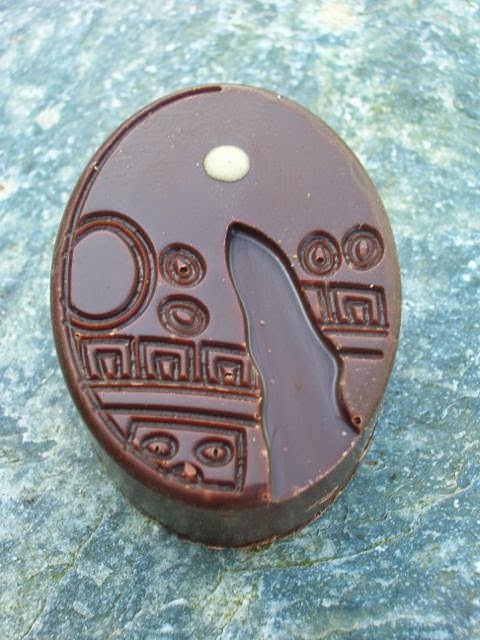 Roasted Almond & Honey Caramel was a total delight. The dark chocolate shell was filled with a runny honey caramel that just made me close my eyes in bliss. After the caramel had faded away I was left feeling quite bereft. Luckily all was not lost; a whole roasted almond gave me something tasty to chew on. 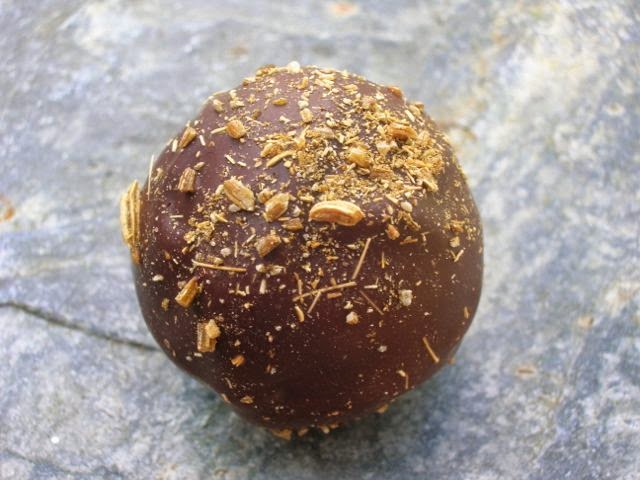 Fennel Cream & Lemongrass was the one that had the most appealing scent. There is synergy to the combination of fennel and chocolate that I find quite attractive. The chocolate here gave off a heady aroma of spice and tobacco which reminded me of tropical nights and made me want to keep on inhaling. Inside was a smooth and creamy white chocolate ganache lightly flavoured with lemongrass which was just perfect. 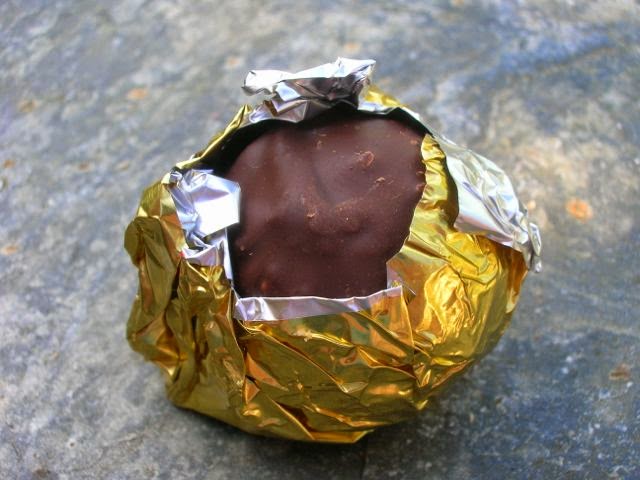 Banoffee Pie was wrapped, only partially but quite provocatively, in silver foil. It was a bumpy dark chocolate shell containing crunchy biscuit crumbs. Inside was a smooth white chocolate banana ganache covered in caramel. None of Paul’s chocolates were overly sweet and neither was this one. It could have been quite sickly, but it wasn’t. A superb homage to one of Britain’s favourite desserts. 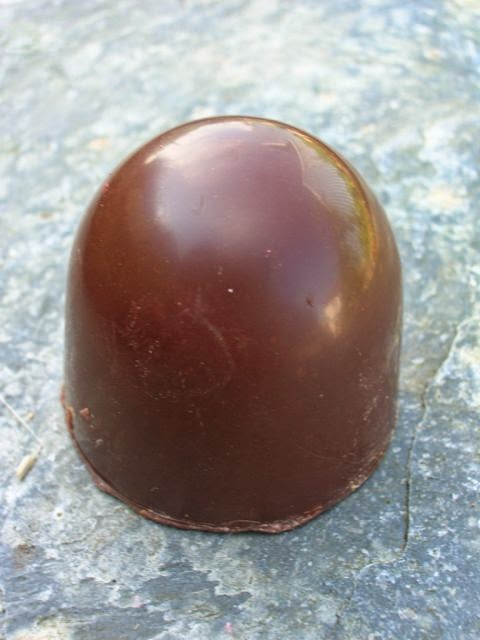 Sea Salted Caramel had to be left until last. As some of you have probably gathered by now, I could easily become a sea salted caramel addict. Well, there are no words to describe how good this was. The caramel was salty, but not overly so. It was soft, but not too runny and it coated the tongue and mouth sumptuously before sadly disappearing. The dark chocolate shell was robust but allowed the flavour of the caramel to remain in the mouth alongside it. I was one very satisfied customer. 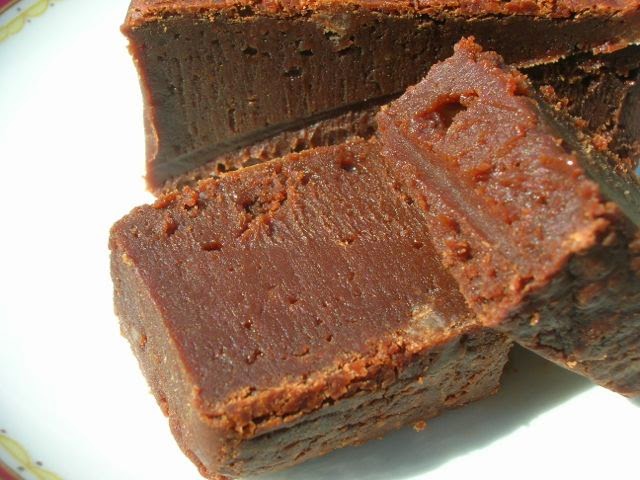 Now for the brownie. After all the fine chocolate I’d tried, I actually found the brownie way too sweet. However, it had a delightful texture and on one of the days that I crave sugar, it would have been ideal. The top was perfectly crunchy and the main part of the brownie was soft and gooey, just how I like them. Really, this was pure melt in the mouth decadence. Paul’s secret weapon in seduction was none other than golden syrup which gives an elusive but distinct flavour.

With thanks to NudgePr for the chocolates and brownie. I was not required to write a positive review and as always, all opinions are my own.