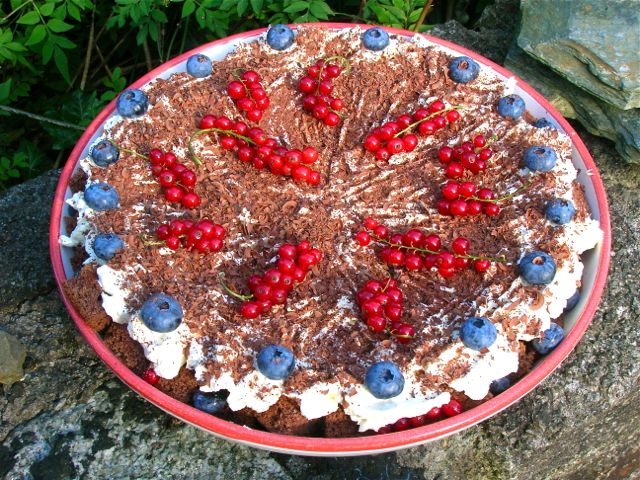 Is it a trifle? It doesn’t have jelly or custard. Is it tiramisu? It doesn’t have coffee.  However, I had a pudding to make for a 40th birthday party and after seeing Chris’s strawberry-rhubarb tiramisu over at Cooking Around The World, I felt inspired to create my own chocolate version using the redcurrants we’d picked from a friend’s garden. 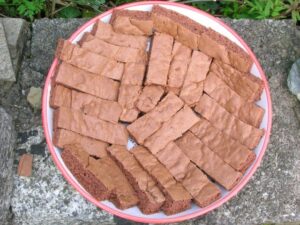 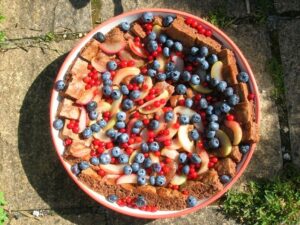 Whether, trifle, tiramisu or something else all together, it was absolutely delicious. The caramelised nectarines were a revelation with the flavours really intensifying during the roasting yet still remaining juicy. The sweet chocolatey sponge soaked in alcohol combined brilliantly with the rich vanilla and rose mascarpone cream, which in turn was offset by the tart and flavoursome fruit. Who needs coffee or custard?

I am entering this into the One Ingredient challenge, hosted this month by Nazima of Working London Mummy, but hosted on alternate months by Laura of How to Cook Good Food. The chosen ingredient is peaches or nectarines.

I’m also entering this into Alpha Bakes which is T for Trifle or Tiramisu this month. Alpha Bakes is hosted alternately by Caroline of Caroline Makes and this month by Ros of The More Than Occasional Baker.

And last but by no means least, I’m submitting these to Javelin Warrior’s Made With Love Mondays. This celebrates food that is made entirely from scratch and as I made the sponge fingers for this, I think it counts.

And another event I’ve just found which, given that the theme is chocolate desserts, I really can’t miss out on! CookEatDelicious-Desserts is the brainchild of Cook Eat Delicious, but is being hosted this month by Culinary Vibes.