Elizabeth Shaw is a well known British chocolatier and purveyor of chocolate mint crisps. The company has recently launched a new range of flavours which you can read all about right here. 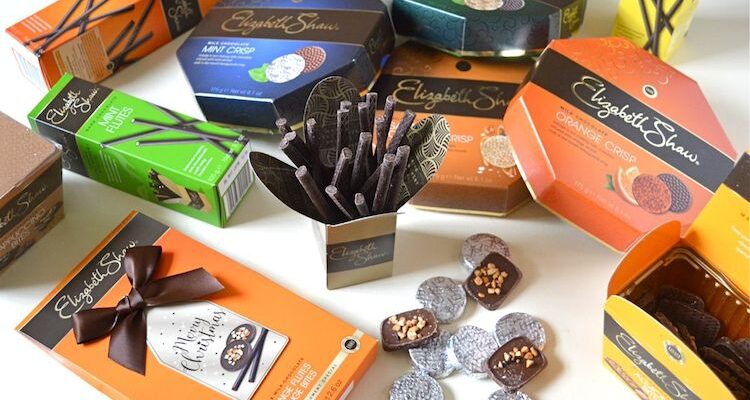 As a confirmed chocoholic, in case you didn’t know, I was happy to accept a hamper of their chocolate goodies to try out. Get your fix where you can, I say!

A large box duly arrived in the post and I was excited to see a variety of Elizabeth Shaw chocolates in it. Pretty much anything wrapped in pretty coloured tissue paper pleases me and the hamper was packed with a generous amount of maroon coloured paper. Lovely.

Although I’ve been known to say on many an occasion that I don’t like my chocolate too sweet, I do have a weakness for caramel, butterscotch, toffee and honeycomb flavours. So despite knowing these chocolate crisps were likely to be very sweet, I was not deterred.

And I was right, I did find them very sweet, but also very hard to stop eating once I’d started. CT thought that although they were sweet, they didn’t hit his palate in the way that many other sweet chocolates do. Each flavour is denoted by a different coloured foil wrapper in the type of autumnal colours I appreciate. CT and I both did our taste testing without knowing what the flavours were.

These chocolates may not be top notch artisanal products but they are real chocolate with no nasty additions and they are also reasonably priced. A 175g box of chocolate crisps costs around £3.50.

Wrapped in dark brown foil, this 45% dark chocolate contains cocoa nibs. It smells predominately of chocolate and CT thought it tasted more like a straight piece of dark chocolate than any of the other varieties.

We both really liked the presence of cocoa nibs which helps counteract the general sweetness and gives an and extended presence in the mouth. I like cocoa nibs and use them regularly, but some may find the crunch of these a little too dry and bitter.

Wrapped in orange foil, this honeycomb crips is distinctly milk chocolate. It contains pieces of honeycomb which have an enticing aroma of toffee and condensed milk. I found this one the sweetest of the four, but CT thought it wasn’t as sickly as he was expecting and certainly not as sweet as the gold.

I found the crunch pieces to have a delicious butterscotch or toffee flavour. But apparently I was wrong as this is the honeycomb crisp.

Wrapped in maroon foil, I found it harder to identify the flavour. But it smelt more chocolatey than either the orange or gold. It was certainly my favourite though, as it’s less sweet than the two previously mentioned. The clincher for me was the “burnt” sugar flavour that I like so much.

CT thought it had a nice fruity note to it. As it happened, I got this one right, it’s a caramel crisp.

Wrapped in gold foil, this milk chocolate contains what I thought were honeycomb pieces. Turns out I was wrong again. This one is butterscotch, or at least that’s what it says on the label. Identity notwithstanding, it has a lovely crunch and flavour, although it is quite sweet.

CT detected a certain drying quality in the mouth after eating this, which once pointed out, I also noticed.

We also tried a 100g mint chocolate bar which is divided into eight large squares. Two squares were plenty and although they were good, the richness of the chocolate and the intensity of the mint stopped me indulging further. CT, likewise, thought this chocolate was just the right side of being too strong.

Also included in our mega box of Elizabeth Shaw chocolates were four packs of flutes. Tall chocolate sticks filled with an enticingly flavoured centre. These are a rather lovely idea and great for an after dinner treat with coffee. They come with their own presentation box, so that everyone can easily help themselves.

We tried the Amaretto ones. As soon as I opened the packet a powerful smell of almonds was released. No surprise there. And also, not surprisingly, they tasted of Amaretto too. I was slightly concerned that they’d taste like the product of a chemistry set. But they were actually rather good. CT thought the flavour was reminiscent of a Bakewell tart. He likes Bakewell tarts.

Thanks for visiting Tin and Thyme. If you try any of the Elizabeth Shaw chocolates featured here, I’d love to hear about it in the comments below. Do share photos on your preferred social media site and use the hashtag #tinandthyme, so I can spot them.

Disclaimer: I was sent a variety of Elizabeth Shaw products for review purposes. As always all opinions expressed are my own. Thank you for your support of the brands and organisations that help to keep Tin and Thyme blithe and blogging.