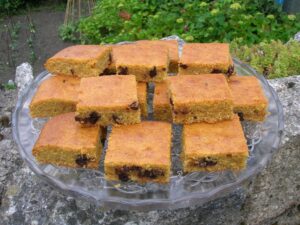 New challenges are popping up all over the place at the moment and I can’t keep up. However, Jacqueline of Tinned Tomatoes recently revived an old event, Bookmarked Recipes, founded by Ruth of Ruth’s Kitchen Experiments. The idea is to actually use some of those recipes we all bookmark and then somehow don’t get around to actually using – I have an awful lot of those. Recently, I saw a post on honey cornbread on Black Book Kitchen Diaries and for some reason it immediately appealed and I bookmarked it. Unusually, it hasn’t been hanging around that long in my bookmarked folder either. On day 9 of a summer cold (I wrote this a while ago and am happy to report the cold only lasted 15 days!) and feeling rather lacking in energy, I wanted to make something really quick and easy. This fitted the bill: throw the dried ingredients together and then add the wet – simples! The original recipe comes from All Recipes, but I’ve adapted it from the American measures, replaced the vegetable oil with olive oil and also added some chocolate – how could I not? This is how I did it:

Half way between bread and cake, this is not for those with a really sweet tooth, but if you like honey and something with a bit of texture, you will find these very moreish. Despite the fact I used wholemeal flour, the lovely yellow colour still came through. CT was particularly taken with these and they didn’t last quite as long as I was expecting.
0
Shares
Share  on Facebook  Share  on Twitter
Tags: cream, honey, olive oil, polenta