Home » Reviews » Eating Out, Travel and Events » Events » Festive Chocolate Making at L’atelier des Chefs
Share on TwitterShare on FacebookShare on PinterestShare on LinkedInShare on E-mail 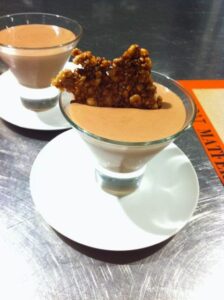 It’s a little back to front, but the chocolate course I did at L’atelier des Chefs on my recent London adventure was the first event I attended soon after arriving at Paddington station. You can read about what I got up to by heading to Friends of Glass and the Paddington Afternoon Tea. The venue was conveniently located just behind Oxford Circus, which meant I could take the tube on a direct line – always a bonus. Oxford Street was busy with Christmas shoppers and I found the festive mood infectious.

Not surprisingly, I was rather excited about getting stuck into chocolate making and was looking forward to the two hour course. There is always something new to learn and new people to meet on such occasions. I was cordially greeted on arrival and offered a drink whilst I waited for the other attendees to turn up; I ended up getting there rather earlier than expected. Surrounded by a plethora of lovely kitchen gadgets in the well stocked shop, I was sorely tempted to buy something, especially as there was a 10% discount on that day. But I had vowed to travel light and managed to resist.

As it happened, there were only two others on the course which meant we had plenty of opportunities for hands on experience as well as the chef’s full attention. As soon as the chef was ready, into the kitchen we went. Laid out before us was a veritable feast of cream and other goodies not to mention chocolate, chocolate and more chocolate – I was feeling more festive by the minute.

Lots of whipping, stirring, beating and tasting ensued. In two hours we made chocolate orange fondants with Grand Marnier cream and orange syrup: chocolate mousse flavoured with cointreau and topped with hazelnut crumble; we also made two types of chocolates. These entailed making quite a bit of ganache, which I found particularly useful. I sometimes have problems when making this at home; it has been known to split or I can’t get the chocolate to melt properly. The top tip I took away from the course was don’t be afraid of boiling the cream. I’ve always been rather wary of overheating cream and now realise why I can’t always get my chocolate to melt – the cream is just not hot enough.

L’atelier des Chefs started in France ten years ago where it now has 17 workshops around the country. It came to London five years ago with the Oxford Circus venue being the first, followed by one in St Pauls three years later. There is also now one in Dubai. Classes cover all sorts of cuisine and range from quick 30 minute sessions to four hour masterclasses. I would love to attend pretty much all of the classes on offer and was particularly tempted by the Christmas baking class and the one for afternoon tea. So much choice. In a more savoury mood it would probably be the Thai class or the vegetarian. If you are stuck for a present for a food loving friend, a voucher for one of these courses would be much appreciated – or is that just me?

Despite having only three of us on the course, L’atelier des Chefs was both busy and popular. A happy bunch of diners, consuming the meal they had just cooked told us how much fun they’d had and one of the other cheerful chocolate makers was on his third course and coming back for more. Regulars, I later found out, get discounts. My only quibble was that although links to the online recipes were sent to us after the event, I would’ve preferred to have paper copies with me, so I could write notes as I went along.

Our chef was friendly, confident and knowledgeable and talked us through the whys and wherefores of chocolate as we went along. I was impressed with the quality of the ingredients we used, most of which was cream and dark chocolate. The kitchen was large and well equipped and the washing up magically disappeared down a hole in the wall, leaving the work surfaces clutter free.

I enjoyed all of it, but especially the chocolate making. I made salted butter caramel for the first time, I’ve only ever used cream before. It was scrumptious indeed and we used it to fill some of our chocolates. The other chocolates were filled with rum soaked raisins and chocolate ganache. These were delicious too and I really must get some raisins soaking in a jar of rum so they are ready when needed. The mousse was an eggless one which was easy to whip up and a great idea for a dinner party. Topping it with some caramelised hazelnuts gave it additional glamour. The fondants are also perfect for dinner parties as they can be made well in advance and just popped in the oven for ten minutes prior to serving.

We took the chocolates away with us, but managed to eat both the mousse and fondant before we left and jolly delicious they both were too. We all had a fabulous time. Cooking with others is usually fun, but creating a huge mess with chocolate together is an absolute riot.

Thanks to L’atelier des Chefs for inviting me to attend the course. I was not required to write a positive review and as always, all opinions are my own.