A delicious hack for a vegan version of grated parmesan cheese. It’s cheesy, tasty and brings a protein and flavour boost to vegan pasta dishes. It’s also really quick and simple to make and only has three ingredients. 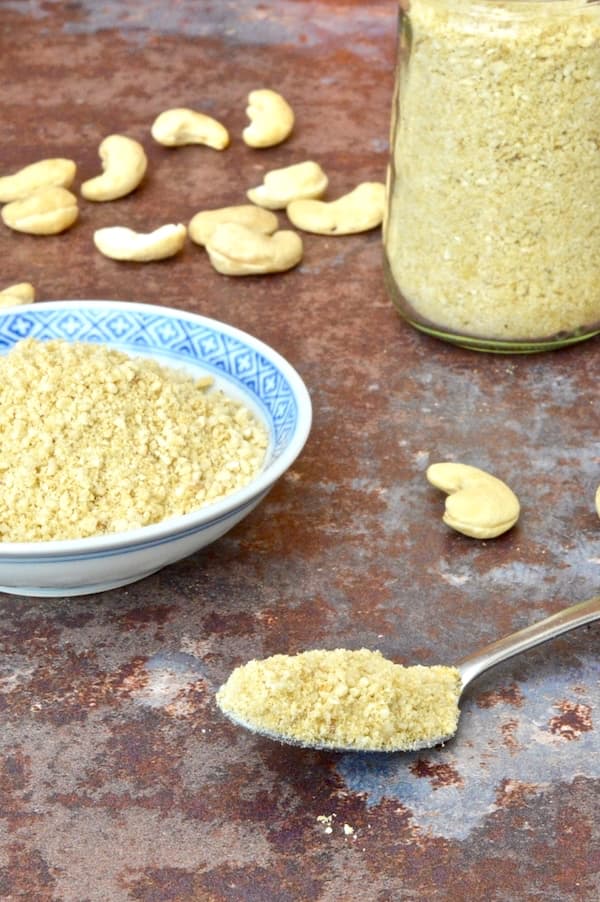 What is Vegan Parmesan Cheese Made Of?

Parmesan cheese, delicious as it is, is not even vegetarian, let alone vegan. You can buy vegan parmesan style cheeses, both in blocks and ready grated. But it’s really very easy to make your own and you can control the ingredients that go into it.

You can use almonds, or even hemp seeds to make vegan ‘parmesan’ cheese. But I tend to go with cashew nuts. They have a softer consistency than other nuts and are also considerably cheaper.

Most recipes for vegan Parmesan cheese use raw nuts and I can see why. They give more of a soft cheese-like texture. However, I like to toast the nuts first as the boost in flavour, outweighs the resulting slightly crunchy consistency.

So, by all means, feel free to make this vegan Parmesan cheese with raw nuts instead of toasted ones, but it won’t taste quite as good.

I use garlic salt to mimic some of the complexity of flavour found in Parmesan cheese. With my Cornish hat on, it’s Cornish Sea Salt’s garlic salt* that I favour. If, however, you can’t get hold of garlic salt, use half a teaspoon of sea salt and a half teaspoon of garlic powder instead.

Vegan ‘parmesan’ cheese doesn’t taste exactly the same as Parmesan cheese. You couldn’t possibly replicate the complex flavour profile of this ancient Italian food. But it’s a surprisingly good imitation and it does taste similar. In fact it’s delicious.

I find that a jar doesn’t get to hang around as long as it ought to.

It tastes cheesy and like classic Parmesan, it’s full of umami flavour. This comes from the nutritional yeast and in the case of my recipe, the roasting of the nuts. Garlic salt adds both saltiness and different savoury notes that give added depth and complexity.

How To Make Vegan Parmesan Cheese

This recipe for vegan ‘parmesan’ cheese is incredibly easy to make. Mainly, it’s a case of measuring out the ingredients and sticking them in a blender or food processor. My recipe is slightly more involved than some in that I toast the cashew nuts before they go into the blender.

Toasting the cashews only takes a few minutes, so it doesn’t really add a lot of time to the recipe. Dry fry the nuts in a pan and toss occasionally. Once done, the pan will only need a quick wipe with a piece of kitchen towel and you can put it away, so there’s no extra washing up involved either.

It’s best to pulse the nuts rather than put on a continuous blend. This way you can keep an eye on the consistency and ensure your vegan ‘parmesan’ doesn’t turn into nut butter. Pulse until the ingredients are properly mixed and reach a grated Parmesan cheese consistency.

For small quantities like this, I find it easier to use a mini food processor*, rather than my Froothie Evolve power blender*, fabulous though that is. For larger quantities a power blender makes a finer grain, but I actually like a bit of texture in mine and prefer not to have it too powdery.

Once you’ve finished making your vegan ‘parmesan’ cheese, pour or spoon it into a sealed container. I like to keep mine in a glass jar. Pop it into the fridge and use as needed.

Sprinkle over pasta, soup, stews and salads. Or use it in any other way you’d use grated Parmesan cheese. I’ve not tried it, but I understand it’s great for making pesto.

The amount I’ve given in the recipe is for about twenty teaspoons, so you don’t need to make it very often. Or at least you don’t if you can keep yourself from using it for every meal.

It keeps well in a sealed container in the fridge for at least a month. And you can always make double the quantities if you think you’re going to use a lot of it. Double or even triple quantities, will only add seconds to the time.

Thanks for visiting Tin and Thyme. If you make this vegan ‘parmesan’ cheese, I’d love to hear about it in the comments below. And do please rate the recipe. Have you any top tips? Do share photos on social media too and use the hashtag #tinandthyme, so I can spot them.

Sprinkle over pasta, soup, stews and salads. Or use it in any other way you’d use grated Parmesan cheese.Please note: calories and other nutritional information are per serving. They’re approximate and will depend on serving size and exact ingredients used.

I’m sharing this recipe for vegan ‘parmesan’ cheese with Effortless Foodie for #CookBlogShare.