There’s nothing like a good day out to revitalise the spirits. And when a day out includes a trip to an organic farm with lunch thrown in for good measure, who am I to resist? On Tuesday I boarded a train and crossed the Tamar once again. I was heading to Yeo Valley to find out from the Soil Association what this year’s Organic September is all about. I had a brilliant day which included a tour of the farm, a cookery demonstration and a reminder of just why I’m so passionate about organic. 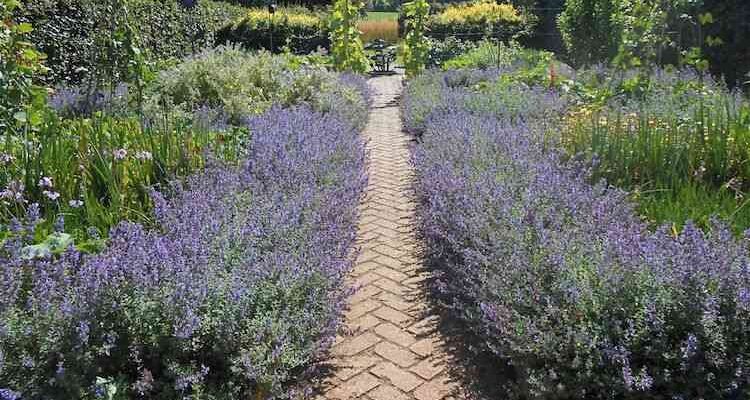 Our base for the day was the organic garden cafe which was not at Yeo Valley HQ where I went for the award ceremony earlier this year, but at Holt Farm, one of the two Yeo Valley farms. What a picturesque location, with Blagdon Lake to one side and the Mendip Hills to the other. As chance would have it, it was a perfect summer’s day and we saw the garden in its prime with bees buzzing hither and thither. It also meant we didn’t need wellies for our walk around the farm what a relief.

On arrival we were greeted by the aroma of just-baked savoury chilli muffins, macaroons and the most delicious granola bars I’ve tried yet. I grabbed a mug of fresh mint tea, one each of the afore mentioned bakes and a yoghurt, Yeo Valley of course – it was the first food to pass my lips all morning. All totally delicious and I enjoyed it even more with the scent of lavender wafting in from the garden. The cafe was wonderful. It had an eclectic collection of china and a dresser stuffed full of covetable teapots. It also had a toasty wood burner for those colder days.

Once we had filled up and heard the Soil Association staff speak with conviction about what they did and why and heard about the upcoming Organic September Campaign, we set off on the tour with the Farm Manager, Jon Wilson. I found it really interesting to hear Jon’s commitment to organic farming; he’d been a conventional farmer when the decision to go organic was taken. As an organic gardener, I know something about the importance of healthy soils, but Jon really knew his stuff and regaled us with all sorts of facts and information. He carried a spade with him so that we could feel and smell the soil directly – and yes, it smelt good.

The cows were curious about the crowd of bloggers walking around their farm, but they all looked very sleek and healthy. Yeo Valley operates a 21 day rotation around the farm, so the fields stay fresh and green and the cows have plenty of grass and herbs to eat. Jon pointed out that one of the hedges we walked past had been laid the day before. I nearly fell over with astonishment. Around our way, the poor hedges get flailed atrociously and I haven’t seen a hedge being properly laid in many a long year. I was well impressed.

After our not very arduous walk, we sat and relaxed whilst watching the Yeo Valley chef, cook our lunch. In remarkably short time he’d knocked up some delicious dhal, fluffy flatbreads, colourful cauliflowers and yummy yoghurt sauce. We ate this accompanied by various salads and finished off with lemon posset and shortbread. I was so intent on eating that I failed to take pictures of most of the food we ate and completely forgot about the pudding. Trust me, it was delicious. It was also all fresh, vegetarian, organic and beautifully presented.

We were sent home loaded down with organic goodies from Yeo Valley and beyond. We even had a Soil Association fine china plate or bowl that had been especially made for the occasion. The idea being that when you finish eating your delicious organic meal, the Soil Association logo is gradually revealed – something to remind us of Organic September.

I’ve been passionate about organic food production as long as I can remember and a Soil Association supporter for nearly as long, but it was great to get reminders throughout the day of just why that is. I could go on at length, but I’ll make do with just a few of them here:

Organic food can cost more for a number of very good reasons, but the benefits of buying and eating it are huge. Good things happen when you go organic. Organic September is a chance for everyone to take stock and see if they can swap one regular food item for an organic one. If we all make a small change to our everyday shopping, we can make a massive difference. I already buy organic milk and organic yoghurt, but I rarely buy organic cheese. I’m thinking that might be my change for September.

Good Energy should get a mention as they are sponsoring Organic September this year. Do look out for the hashtag #OrganicSeptember next month and get involved as much as you can. Head over to the Soil Association website to get the lowdown. You’ll find a tip for every day of the month and I know there are prizes!

My thanks to The Soil Association, Yeo Valley and Good Energy for the visit. Everyone we met on the day was welcoming, helpful and their dedication to organic shone through, just like the sun. I was not required to write a positive review and as always, all opinions are my own.