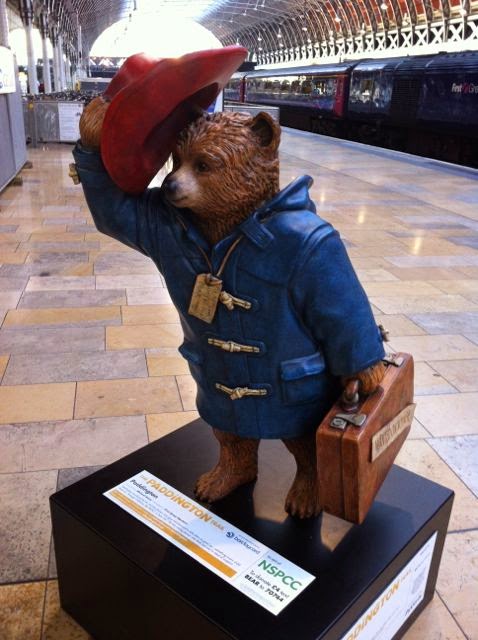 Yesterday, I had the great pleasure of indulging in Afternoon Tea at The Athenaeum Hotel on Piccadilly. Afternoon tea at such an iconic London hotel would be a real treat at the best of times, but this was a special tea in honour of Paddington Bear. Paddington, the movie, was released yesterday and London has got Paddington Bear fever, it would seem. There is a Paddington trail around the city with 50 statues of one of the world’s most popular bears. I managed to spot two of them during my brief 24 hour stay including the one we are all familiar with at Paddington Station.

It may have been afternoon tea that Fiona of London Unattached and I sat down to, but it was a lunchtime sitting as my train back home to Cornwall left at 3pm. Afternoon tea at lunchtime was a new concept for me and I was surprised to find we were not alone. In fact all the tables in the Garden Room, where tea is served, were fully booked. Given that The Athenaeum won the Tea Guild’s award for Top London Afternoon Tea in 2012, this shouldn’t really have been a surprise.

Elegance and luxury at such a top class hotel, I was expecting, but there was also comfort and ease – no starchiness and disapproving looks here. The waiters were friendly and attentive and the service was good, if slightly disorganised. The soft light wasn’t great for taking photographs, but it created a relaxing ambiance, which is what it’s all about really. The tea more than lived up to expectations.

We were shown to our table by a window, complete with comfortable sofa and arm chairs. Whilst sipping on a glass of very nice Lanson Black Label champagne, we were offered the tea menu to peruse. Being a bit of a tea purist, I was delighted by this. There was a good variety of loose leaf teas on offer, but interestingly there were samples of the actual tea leaves on display too. No wonder the Tea Guild were impressed. Fiona chose Japanese Sencha green tea and I opted for a pot of Pai Mu Tan white tea. Both duly arrived in silver teapots with an accompanying silver pot of hot water, all of which were regularly inspected and topped up as necessary, without either of us having to ask.

The food soon arrived, elegantly laid out on a three tier cake stand. After doing a big of oohing and aahing over the contents, especially the top layer which included cute chocolate cups filled with mousse, we hungrily tucked into the finger sandwiches. No marmalade sandwiches for me, but there was clementine marmalade to accompany the ham for Fiona. I didn’t take too much notice of the meat fillings, but I was pleased to see cucumber and cream cheese on offer together with egg mayonnaise. I was also presented with a plate of five vegetarian finger sandwiches laid out in a star shape. I would have liked to have seen something a bit more creative than tomato and lettuce, but I enjoyed them nonetheless.

Marmalade, not surprisingly was a key theme of the tea and for the first time ever, I had marmalade with my scones and clotted cream, rather than jam. Both Fiona and I were a little dubious about this particular change to tradition, but when we tucked in, we were pleasantly surprised. We had a choice of plain or cranberry scones and I found the marmalade to be particularly delicious atop some of the latter; cranberries and orange have a natural affinity. Jam was served alongside the marmalade if required.

Starting to feel a little full, there was still some room left for that enticing top layer of treats. I’ve already alluded to the chocolate cups which were topped with a little marmalade and were quite delightful. There was also orange macaroons, an orange bakewell tart and an adorable little glass of orange and passionfruit  jelly.

At regular intervals we were offered further sandwiches and scones. We politely declined as we already had more than an elegant sufficiency, but it gave a feeling of abundance which was a nice touch for such a rare treat. We were just finishing off the last few goodies when the cake trolley was wheeled over. Well, neither of us could fit in another morsel, but everything looked so pretty and enticing, we asked if we could take something away with us. My thoughts turned to CT who had missed out on all this indulgence, so I chose a little something with him in mind – a chocolate log filled with salted caramel cream. It was very thoughtfully placed in a gold cardboard box for easy transport. It made the long journey home in tact and was gratefully demolished fairly soon after I arrived. I did get a little taster and it was as good as it looked.

The Paddington Bear Afternoon Tea costs £39.50 without champagne and £47:50 with it. £5 of this is donated to the official Paddington Bear charity, Action Medical Research for Children. Everything looked fabulous and was beautifully presented and it all tasted pretty good too. For a top class afternoon tea with as much as you can eat and more, I would describe this as good value. I waved good buy to the suitcase of bears at reception with a full stomach and wasn’t entirely sure I was in a fit state to run for the train if it proved necessary.