Every so often I like to bring you a taster of some of the chocolate that has passed through Tin and Thyme HQ. You can find plenty of additional chocolate review posts if you fancy seeing a few more unusual and artisan confections. 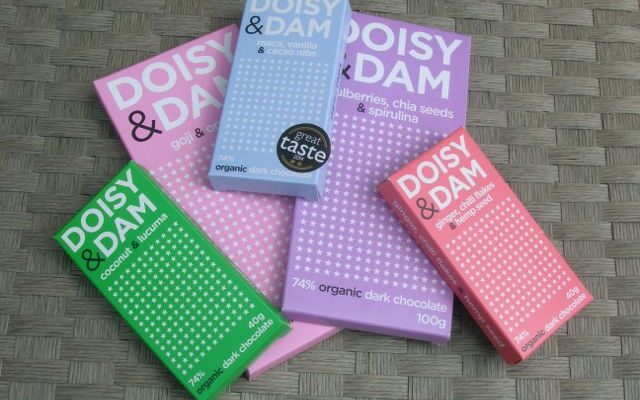 New on the chocolate block, Norfolk based Doisy and Dam have come out with a range of handmade chocolate bars appealing to those who like their chocolate, but want it to be good for them too. The chocolate is all 74% dark and organic too, although not certified by the Soil Association. The nutrient values of the various ingredients are given with some infographics interspersed with a quip or two – if you’re lucky. I hadn’t realised, until I read one of the packs that hemp provides a complete source of protein.

Beautifully packaged with an inner wrapping of bronze coloured foil and an outer one of colourful cardboard, I heartily approved – not a bit of plastic to be seen. They come in 100g bars and rather cute little 40g boxes. The rich dark nature of the bars, precluded any scoffing and a couple of squares at a time was plenty enough to satisfy.  This chocolate felt as though it was an indulgence, but thankfully not a particularly naughty one. I wish the creators Rich and Ed the best of luck with these bars.

This was the one I reached for first, I couldn’t help myself, I love coconut chocolate. As soon as I unwrapped the foil, an aroma of coconut wafted towards my nostrils in a most seductive way. The chocolate was rich and coconutty and utterly delightful. I perhaps shouldn’t have started with this one as  I had a feeling it would be my favourite and it was. Sadly for me, I only had a 40g bar.

Goji is a hard flavour to detect, but this had a subtle fruity note which wasn’t just orange and there were bits of berry punctuating the smoothness to give a chewy contrast. The orange flavouring was gentle and tasted of real orange, something some other orange flavoured chocolate could learn from.

Being something of a chilli head, I do like the combination of chilli and chocolate. This bar was particularly fiery with hot ginger added to the mix, a lovely combination that isn’t used often enough in my opinion. Chewing on chilli seeds embedded in chocolate was a first for me. I have to say the presence of hemp seeds rather passed me by, which was probably a good thing as I don’t find them particularly palatable.

This was my least favourite bar. I’ve never really got on with maca, which I find a bit too bitter for my taste and I could definitely detect it here. It has a bitterness which is quite different to cacao nibs, which I like. As with the orange bar, the flavours were subtle, but I felt this one could have done with a bit more than just a hint of vanilla; it needed a lift. However, I have heard from others that it is their favourite bar and it also won a Great Taste Award last year, so there is just no accounting for tastes!

Fresh mulberries are sadly very hard to get hold of. My mother planted a mulberry tree a couple of years ago; I’m not sure how long it will be before we get any fruit from it. Meanwhile dried mulberries are not a bad substitute, they are chewy and slightly sticky with a pleasant flavour. They are even more appealing when covered with chocolate. I couldn’t taste the spirulina, but imagined it doing me lots of good as I savoured the chocolate. The chia seeds provided an interesting crunch and made a change from consuming them in my morning smoothie.

Handmade in Cornwall, these chocolates are from Chocali, a welcome addition to the growing number of Cornish artisan chocolatiers. They are so new, there website is still under construction, so I have linked to their Twitter account instead. The rather smart black and pink packaging didn’t give much information away and said nothing about the origin or cocoa content of the chocolate. The box of six chocolates, weighed 57g and were filled with flavoured fondant which had a fresh taste and feel which I found very pleasant.

I have a passion for passionfruit, so this was the one I had to try first. It was really good, but interestingly tasted more like grapefruit than passionfruit.

I’m a sucker for peppermint creams and this was a particularly good one. Dark chocolate acts as an excellent foil for the sweet minty fondant inside.

This was truly blissful and tasted distinctly different to plain old orange.

I’m also a sucker for rose creams and like the peppermint ones, these were really good. A noticeable rose flavour without being too powerful.

I was expecting this to be tart, so was a little disappointed when I realised it was flavoured with lemon oil rather than the juice. Once I got used to the idea, I found it very pleasant.

I don’t know why it is, but strawberry creams are always my last choice, yet when I actually get to eat one, I usually enjoy it. I certainly enjoyed this which really did taste of strawberries, even if it was a bit on the sweet side.

There were no ingredients listed on the packet of this 100g bar, but the chocolate was milk and tasted sweet and creamy with caramel notes and was very pleasant, if a little sweet. The fudge pieces gave the chocolate visual appeal and added additional flavour and texture.

It’s been a while since I tried some hot chocolate and these three boxes of the new Origin range chocolate from Jaz & Jul’s were worth the wait. They were all delicious of course, but quite varied in flavour and depth and I found it hard to choose a favourite. The colourful cardboard boxes contain 60g of dark chocolate, enough for two luxurious cups. The chocolate is finely ground, so it melts quickly and easily when stirred into hot milk. Like all of their chocolate, it is ethically sourced and organic too.

I don’t think I’ve ever had chocolate from Brazil before. The beans used are Trinitario and are grown in the state of Para, deep within the Amazon rainforest. I found this to be rich and flavoursome and somehow more chocolatey than the other two.

I have a bit of a weakness for Madagascan chocolate which has a particularly distinctive taste. Made from Malagasy cocoa grown in the Sambirano Valley, this did not disappoint and had the slightly sharp buttermilk notes I was hoping for.

The rare white criollo beans used in this chocolate are from the Alto Piura region of north-west Peru and are highly prized. It smelt quite earthy and indeed it tasted robust with notes of tobacco and coffee.

Thorntons needs little introduction. The shops have been around on Britain’s high streets for many years now and are loved by many.

The new Summer Collection is out. I was sent a 181g box containing 16 chocolates to try. I sometimes find Thorntons chocolates too sweet, but these were so light and moussy, they were rather moreish and perfect for summer. There’s something to suit most tastes in the box from a dark Chocolate Lime, to white chocolate Strawberries and Cream.

I was rather taken with the Blueberry Cheesecake covered in white chocolate, but my absolute favourite was the Raspberry & Mascarpone Fool, which was both tangy and creamy at the same time – much as a good fool is meant to be. I should just mention that the Chocolate Orange Mousse and Lemon Meringue were rather good too.

As regular readers will know, I’m a big fan of this Cornish bean to bar artisan chocolate, handmade in Penryn. A friend recently sent me one of the bars I haven’t tried before but have been coveting for some time.

Growing up amongst the wild gorse on the moors and breathing in the heady scent of coconut that emanates from the flowers in spring, I was intrigued by this 70g bar. The scent escaping from the packet was indeed that of gorse and when I tasted the smooth sweet chocolate, I nearly swooned. A true taste of Cornwall.