Chocolate may be my number one passion, but there is nothing quite so refreshing as a good cup of tea. For me, the best cuppa involves loose leaf tea and plenty of room for the leaves to swirl around, expand and infuse. Read on for my review of the IngenuiTEA teapot along with a whole load of Adagio loose leaf teas. 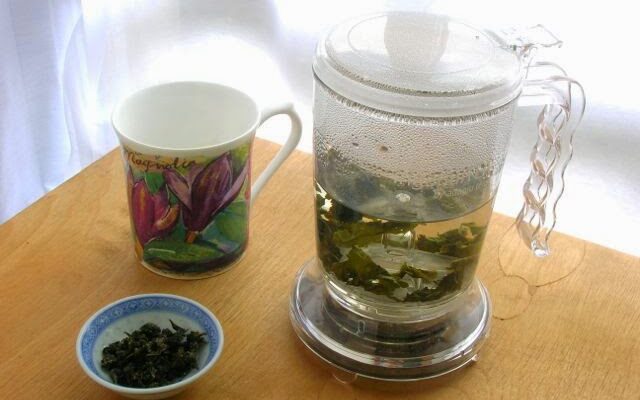 The collection of teapots in our house is steadily growing. This suits us fine as we now have the right teapot for every occasion. Or at least I thought we did. When I was sent an ingenuiTEA to try out from Adagio Teas, I realised our collection was by no means complete.

This contraption brews loose leaf teas, letting out the steeped tea from the bottom rather than through a spout. Tea leaves are placed inside the pot and hot water added. As soon as the tea is ready, it is placed atop a cup; the valve opens and the clear tea filters through. Once you have finished with your tea leaves, they can be tossed away and the ingenuiTEA washed up – by hand or in the dishwasher.

IngenuiTEA – What I Liked

IngenuiTEA – What I Was Less Keen On

Much as I love teapots, when I’m on my own, a pot of tea is not always what I want. The tea can get cold before ever I get around to finishing it. Luckily Adagio now has a new line which is  perfect for such occasions. It’s a porcelain cup with infuser. It may be called a cup, but it’s actually a large mug, with accompanying lid and infuser.

The infuser is also large allowing plenty of room for the leaves to expand and it handily fits into many other drinking vessels if you fancy a change. It’s made of stainless steel so is also good and sturdy. I’ve had metal infusers before, which have been so feeble they’ve given up the ghost after very few uses. This one looks as though it’s here for the long haul. It also makes washing it up nice and easy as there is no fear of it breakages. I do find the solid base a bit annoying as the liquid is unable to escape properly thus leaving a rather mushy pool of leaves and tea behind – but this is a minor quibble.

The cup, lid and infuser are all dishwasher safe. The lid is not only essential when the leaves are infusing, but it can be used to keep the tea warm in between sips. Handily, it doubles as a receptacle to place the infuser on when the tea has been steeped to your liking. This no fuss, no mess method makes it ideal for office use as well as at home. I chose a bright red one, called barn for some reason, but there are five other colours to choose from. Hmm, maybe I should have gone for the chocolate one.

Along with the ingenuiTEA, I was sent five sample packs of Adagio teas to try. I do like a bit of tea sampling – it’s very nearly as exciting as chocolate tasting. All of the teas are hand picked and sourced direct from artisan producers. You can read interviews with some of the farmers on their website. The section dedicated to Tea is Good for You is worth a read, though if all the various health benefits of tea are to be believed, I should live to at least 150.

The more teas I sample, the more I’m amazed at just how different they all are. I’d requested a variety of teas, some of which I was familiar with and others I’d not tried before. These sampling packs struck me as a particularly good idea; you can try before committing to a more extensive purchase. Each pack is resealable and contains enough tea to make a good ten cups. They come with instructions which include brewing times and water temperature, although being an American company, this was in degrees fahrenheit rather than celsius.

I had to try this one first, of course. I’m not normally a fan of black teas, but I will partake of chai, Earl Grey and the occasional speciality tea if it’s on offer. This was a black Ceylon tea with cocoa nibs, dark chocolate chips and a natural chocolate flavour.

I’ve tried several chocolate teas now, but never one which contained actual chocolate pieces. This is the only one I tried adding a dash of milk to as I thought it would work well with both the black nature of the tea and the chocolate. I was right, although it worked equally well without. The chocolate flavour shone through with fruity notes and a slight astringency.

Good quality white tea is my favourite version of Camellia sinensis. This one was a new one on me. The unopened tea buds are harvested along with the two newest leaves. This freshness really comes through. It has a light fruity aroma with a delicate taste.  Floral and fruity tones shine through and it isn’t in the least bit bitter. Really it is quite delicious and an excellent accompaniment to afternoon tea.

I know very little about oolong teas, other than they are complex in both production and flavour and are thus correspondingly more expensive than many other teas. They are a speciality of South China and although they come in many varieties are all oxidised to some degree or other.

To my knowledge, this was the first oolong tea I’ve ever tried. Ti Khan Yin being greenish in colour is a lightly oxidised tea. It has both a grassy and floral aroma and a fresh sprightly taste that both CT and I really liked, yet, the notes left lingering on the palate are woody ones. This is a nice refreshing cuppa which works particularly well as a breakfast tea we thought.

This red South African tea, not to be confused with the more commonly known rooibos, has an aromatic fruity scent with honey notes. It is not a true tea, being the leaves of a legume called Cyclopia rather than what we commonly know as tea, Camellia sinensis. It contains no caffeine, is low in tannins so there is no bitterness if over brewed and it is said to lower cholesterol and fight respiratory infections.

CT, who has fond memories of his trip to South Africa many years ago, thinks it encapsulates the smell of the bush and transported him back there almost immediatley. The tea is the colour of honey and has a pleasant sweet and fruity flavour, not overpowering, but refreshing. This has been a firm favourite of ours for many years.

Tight clusters of curled green tea leaves form little balls known as pearls. As soon as they come into contact with hot water they unfurl in a rather beautiful way. Also beautiful is the aroma generated from the Jasmine which quickly scents the room. The flavour is prominent, but not overpowering as can be the case with some jasmine teas. We both thoroughly enjoyed this one and it works particularly well as an after dinner refresher.

I’d heard quite a bit about pu erh and that the name is perhaps quite apt in terms of smell. However, this one had a sweet heady aroma both when opening the packet and as brewing tea. With an added spice mix of cinnamon bark, orange peel, ginger root and aniseed, I guess this shouldn’t have been a surprise. It’s like a lighter version of masala chai and is very tasty with the warming and zesty flavours of cinnamon and orange to the fore.

The scent emanating from the packet on opening was not at all what I expected from a black tea. It was pure summer – sweet grassy newly harvested hay. Large sticks of tea that unfurled into leaves in the infuser and tasted just as good as they smelt. Light and fragrant as it was, is seemed more like a green tea than a black one. The world of tea never ceases to fascinate.

Although the scent of chamomile is one of my favourites, I’m really not that keen on drinking it; when I saw that this herbal tea contained chamomile, my heart sank a little. It perked up on further reading when I saw it contained my favourite tea rooibos too. But I thought it a very odd mix of flavours with chamomile, peppermint, rooibos and rooibos vanilla. Chamomile and peppermint both have strong scents and I felt the aromas were fighting each other rather than melding or complimenting.

Strangely when water was added, the scent improved and I found myself liking it. The proof would come in the drinking. Weeellll, it’s actually not bad. The mint is refreshing and the chamomile and vanilla give a sweet note, though I’m not quite sure where the rooibos comes in. I don’t think I’d go out of my way to drink this, but it makes for an interesting change.

Adagio Teas have kindly agreed to give one of my readers a an IngenuiTEA pot and a selection of tea samples. To be in with a chance of winning, please fill in the Gleam widget below. You will need to leave a comment on this post, answering the question, which then gives you additional chances to enter if you so wish. Gleam will pick a winner at random from the entries received. If you are commenting anonymously, please give me some way of identifying you as I will be verifying the validity of entries. Any automated entries will be disqualified. This giveaway is only open to those with a UK postal address. Winners will need to respond within 7 days of being contacted. Failure to do this may result in another winner being picked.

Prizes are offered and provided by Adagio Teas and Chocolate Log Blog accepts no responsibility for the acts or defaults of said third party.

Do take a look at the Chocolate Log Blog giveaway page to see if there is anything else you would like to enter.

Thanks to Adagio for the ingenuiTEA and tea samples. There was no requirement to write a positive review and as always all opinions are my own.