Living down in the far South West, it can often be difficult to get to some of the big baking events held around the rest of the country. I have not yet managed to attend one. However, this year, everything has changed. Amidst a fanfare of excitement and incredulity, the very first Big Cake Show came to Exeter last weekend: a three day extravaganza of baking demos, workshops, competitions, book signing and shopping. 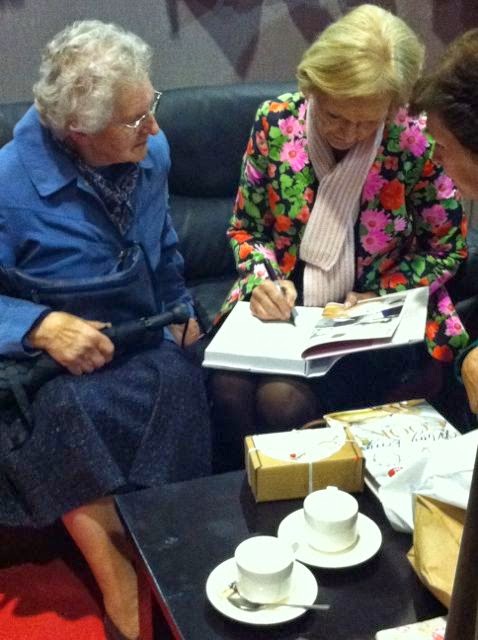 I was surprisingly excited to be invited along to The Big Cake Show and even more so when given a Golden Ticket on arrival. As well as a goodie bag and a dedicated refreshment area, this gave access to special seats right at the front of the main demonstration theatre – well worth having. Stars from the Great British Bake Off (GBBO) were there to give demos, with Mary Berry and Paul Hollywood being the star attractions. On the day I attended, it was Mary in residence. I was pleased to see a number of our fabulous local chefs were much in evidence too.

My first thoughts were of astonishment at the size and busyness of the event. It took nearly an hour to make the two mile drive from the motorway to Westpoint, where the show was being held. The place was heaving. So it was very lucky that Jill from Lapin d’Or arrived just as I was being given my goody bag by Tracy, the PR and Marketing Manager. I had been hoping to meet up with her, but with no wifi and so many people, it would have been a near impossibility if we hadn’t happened to arrive at the same time.

Not having wifi and no signal either was rather annoying as there was so much of the moment I wanted to tweet and instagram. This was a marketing opportunity lost, I felt. I was especially wowed by the main cake competitions where the theme for both the junior and adult catagory was the South West. The winning cakes were fabulous, but there were so many clever and quirky cakes there I would have found it very difficult to pick winners. Here are three of the ones I found particularly appealing. 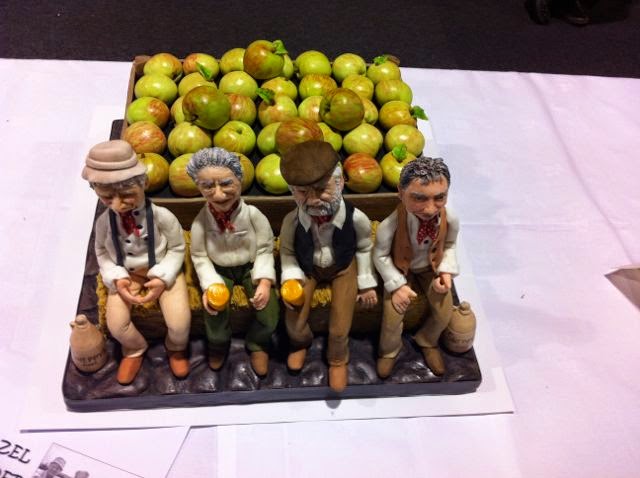 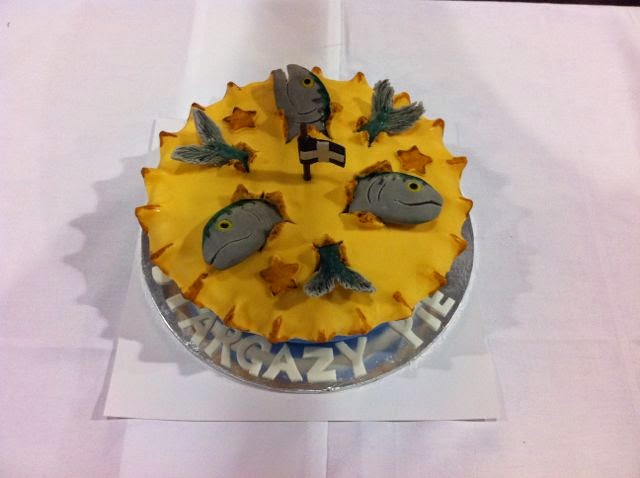 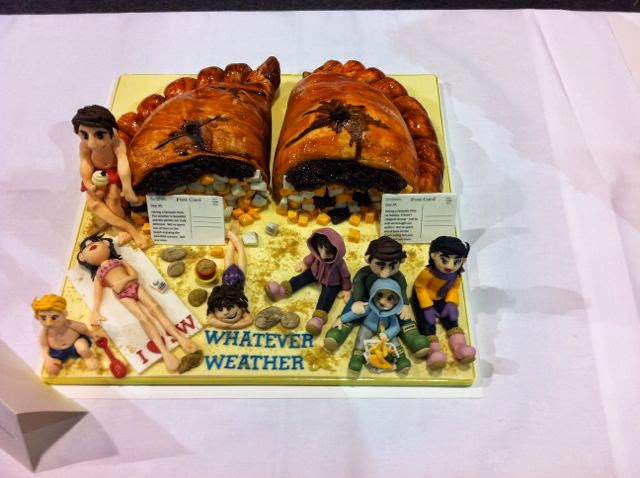 On the day that I attended, Mary was showing how to make her whole lemon cake. As I’d seen this on iPlayer very recently, I watched it from afar whilst enjoying a very welcome cup of tea. Not surprisingly she was hugely popular. She was also professional, interesting and very natural, showing herself to be completely at ease in front of the crowd.

I sat down to watch two of our local chefs, Chris Tanner and Peter Gorton, making a meringue roulade and chocolate tart respectivley. Both offerings looked fantastic and I was hoping we might get to try them, but sadly not. Having learnt to spray water on the back of the meringue paper if sticking becomes an issue, I may now become emboldened to try making a meringue roulade for myself.

Although I was there for over five hours, there was heaps I didn’t do and see. I’d would like to have seen more of the cookery demos, but there just wasn’t time. There were a huge number of exhibitors and I’d like to have had a good look around. However, most of the stalls were so crowded, it was impossible to even see what they were selling and I needed elbows sharper than mine to position myself in suitable vantage points. I did manage to make a couple of purchases however:  some red dust which I subsequently used on my mother’s lavender cake and a textured rolling pin which I’m looking forward to trying out.

There were a couple of finds that were particularly interesting. The first was Choc Edge, a prototype for a 3D chocolate printer. Jill and I watched it do a couple of turns printing Mary Berry’s face onto some paper. I don’t think it’s quite there yet, but I suspect it will be soon. A brave new world has arrived, but at least it’s chocolate.

The second was Caprine Capers, a chocolatier making chocolates using milk and cream from their own goat herd. Other than the goat’s cheese chocolate truffles I made, these were the first goat chocolates I’ve come across and I was very impressed. They are perfect for those with a cow’s milk intolerance and there seemed to be plenty of takers on the day. 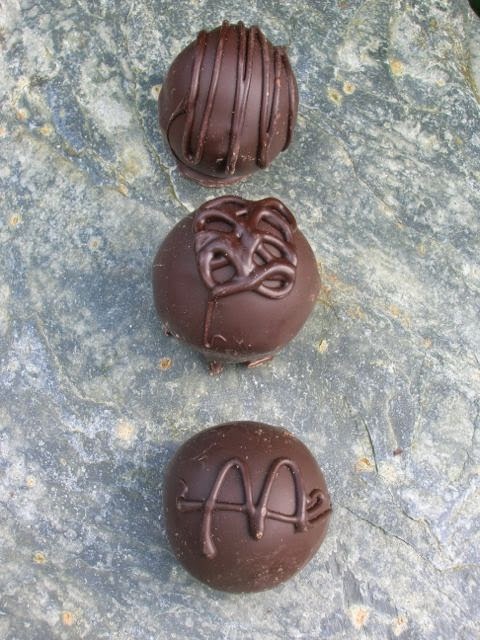 The good folk of Caprine Capers were somewhat concerned their stocks would run out before the show had ended. Nevertheless, they kindly gave me three of their truffles to take home and try: vanilla, calvados and brandy, all enrobed in a layer of dark chocolate. Rich smooth ganache, with complex flavours, including a touch of goat, all were highly satisfying and a great antidote to mindless scoffing. Of the three, the calvados was my favourite with it’s hint of apple and warming alcohol. Both CT and I were quite enamoured. Yes, I did share – reluctantly. 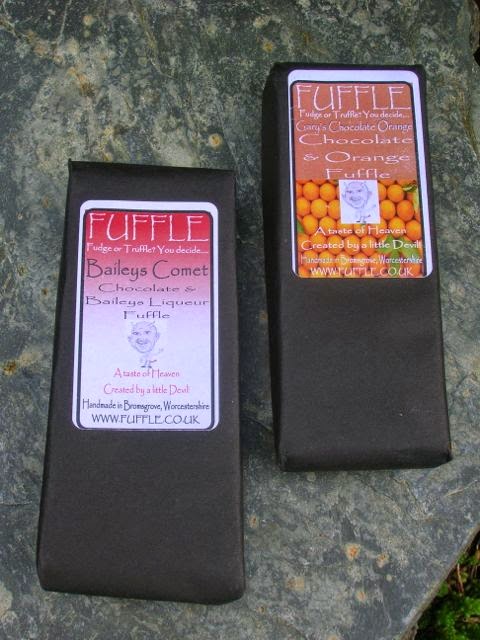 I was also kindly given a couple of Fuffle bars to take home and try. Fuffle? Chatting to the creator, I discovered this was a cross between fudge and truffles. The Little Devil (his words not mine) doesn’t like crumbly fudge, so he came up with something that has the texture of a truffle and the taste and sweetness of fudge. 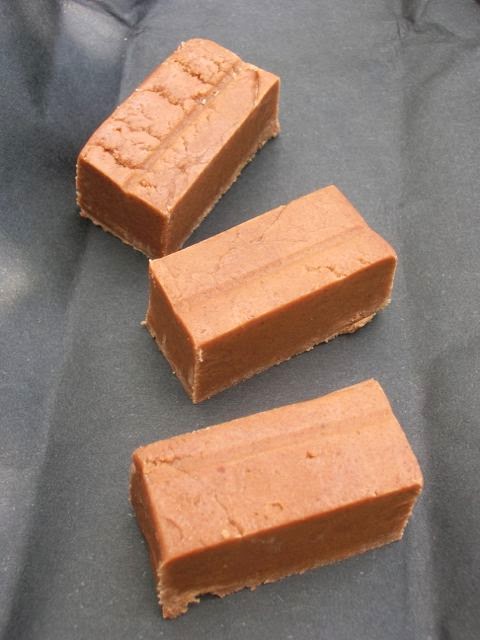 Handmade in Worcestershire using simple ingredients, I enjoyed both of these creamy bars: Baileys Comet and Gary’s Chocolate Orange. The chocolate and Baileys liqueur fuffle was my favourite as it really did taste of Baileys, one of my favourite tipples. It was colour coded with a green inner wrapper for its Emerald Isle provenance, I assume. The second Fuffle was perfectly pleasant, but I felt the orange rather drowned out the chocolate. This one had an orange inner wrapper – a nice touch.

All in all it was a very busy day. The South West, it seems has taken cake to its heart and the date for next year’s The Big Cake Show, has already been set. Diaries out – 20-22 March 2015.

With thanks to Tracy for the VIP pass and goody bag. I was not required to write a positive review and as always all opinions are my own.