Little chocolate chip cakes, filled with spiced apple sauce, then drizzled with salted caramel. What’s not to love? These spiced toffee apple bonfire cakes are perfect for munching around the fire on cold autumn nights.

END_OF_DOCUMENT_TOKEN_TO_BE_REPLACED 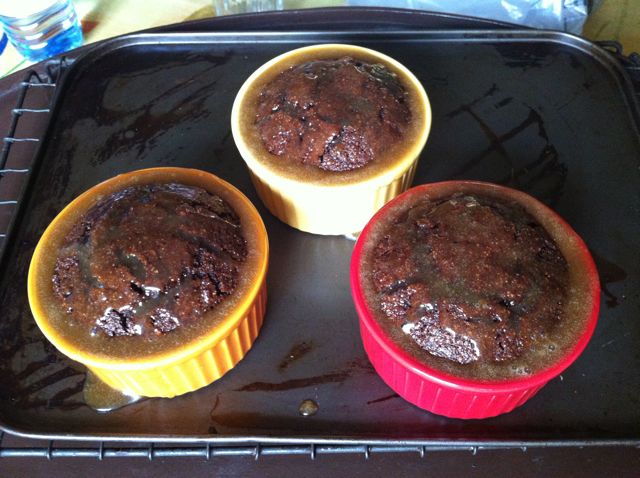 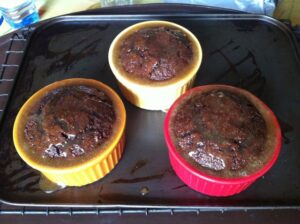 It’s Dom’s second anniversary at Belleau Kitchen this month and to help him celebrate he asked us all to randomly select a recipe from one of our baking books. Hooray. This narrowed things down and made the task somewhat easier as I didn’t have to search through every bookshelf and stack in the house. Including my chocolate books, this gave me twenty in total. I asked CT to choose a number and as it was Friday the 13th at the time, 13 was the number he chose. Luckily 13 was my lovely grandmother’s lucky number, so I don’t feel in the least bit filled with gloom by this particular integer. And I was right not to be gloom filled as the book turned out to be Green & Black’s Ultimate. Flicking through the pages with my eyes closed I landed on a recipe for pudding – Chocolate Sticky Toffee Pudding Cake to be precise. Given that there is often a piece of cake lying around the house to be had, I rarely make puddings, but a friend coming over for supper a couple of night’s ago provided the perfect opportunity. 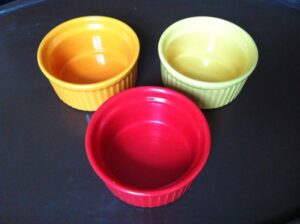 This very friend had persuaded me just a few days before to buy these cheery little ramekin dishes when we were out and about. So rather than make one large cakey pudding as suggested, it seemed more apt to make individual ones and use these colourful ramekins. As we still had quite a bit of cake left over from my first Clandestine Cake Club event, I only made half of the amount specified in the book. 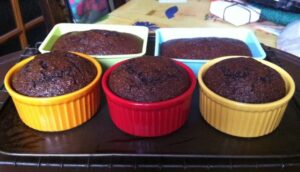 Luckily the puddings were still warm and quite delicious. The dates and spelt combined to give them quite a chewy texture and substantial presence, just what was needed for the damp and cool weather we are experiencing. The sponge wasn’t overly sweet, so the toffee sauce was by no means saccharine overkill.

A friend’s daughter was celebrating her 3rd birthday and I was asked to make the birthday cake. I was well chuffed, but also rather nervous – you don’t really want to mess up someone else’s birthday cake. Anyway, as soon as she asked me, I knew exactly what I wanted to do. The rolo cake I’d seen on Jac’s Tinned Tomatoes blog, over a year ago now, had made an impression and I was waiting for the right opportunity to make it. Jac in turn had got the recipe from The Caked Crusader and it was actually hers I used. Jac tends to use US measurements and I’m not a fan of cups. I did increase the measurements a bit anyway as I was using a larger cake mould than the one specified.

Whilst shopping for the rolos, I had a bit of an unexpected dilemma. Not being in the habit of buying them, I hadn’t realised they were made by Nestle – oh dear! I haven’t knowingly bought anything from Nestle since I was old enough to form an opinion on such matters. Okay, I thought I’ll do without the rolos and go for a large bar of Cadbury’s caramel chocolate instead. As I was picking the bar up, however, I realised how ridiculous the whole thing was. Cadbury’s has recently been taken over by Kraft – well, as far as I know, they are no more ethical than Nestle. For want of a better alternative, I have continued to buy Green & Black’s, despite them now being owned by Kraft. So I pulled a face and bought the rolos.

Luckily, I needn’t have worried; the cake proved to be a huge success and was enjoyed by adults and children alike. The birthday girl showed her appreciation in the usual way. Although I wasn’t there, a slice was very kindly kept back for me so that I could try it. It was moist and tasty with slightly chewy melted toffee bits in the middle. I’d be happy to have this for my birthday cake whatever my age.

As some of you know, I’m a huge fan of using yogurt in cakes. I find that it helps them to rise, gives a good flavour, a smooth texture and keeps them nice and moist. So I was delighted to receive another delivery of TOTAL Greek Yogurt recently (see previous posts relating to this yogurt here and here), both full fat and 0% fat. I’ve found the 0% fat to be excellent in scones and soda breads although I did use the full fat in these Chocolate Chip Scones. The full fat is wonderful used in cakes, puddings and is also a perfect accompaniment to curry or Mexican food.

I was keen to get baking. I’d come across a one-mix chocolate sponge cake in The Chocolate Cookbook by Christine France that I recently borrowed from our local library. I’ve sadly neglected our public library in recent years and of course now they are threatened, I’m keen to save them. The “save our libraries” day a few Saturdays ago, kick started me into action and I staggered down the street with a pile of really good books.

Anyway, back to the sponge. I chose butter rather than the margarine used in the recipe (because in my opinion, butter is a more natural and healthier product than margarine) and changed the method. This was due to my usual trick of forgetting to take the butter out of the fridge well in advance of the exercise. To make the most of the yogurt in this cake, I thought I’d try making a yogurt ganache to sandwich the cakes together. I had no idea how this would work, but most things are worth trying at least once. Unusually, it used golden syrup in the mix and it was this that had caught my eye when browsing through the book. Another parcel I’d recently been sent (more about this in a later post) contained a bottle of toffee syrup. To be honest, there’s a limit to how much toffee syrup I could use and it had been languishing in it’s box for quite some time. So, substitute the toffee syrup for the golden syrup and away I go!

The cakes turned out to be a lot flatter than I would have liked. I think this was more to do with using cake moulds that were way too big rather than the lack of rising the cake actually did. Perhaps, as a result of using the melting method to make this cake, the end result was denser than I was expecting. This may not have been my most successful cake ever, but it was still very tasty. It had a nice consistency with very few crumbs, a good mouth feel and a pleasant toffee flavour with a yogurty tang. I was a little impatient with the ganache and put this on before it had set properly, but it tasted great and complemented the cake really well; I shall be using this again. When I asked CT what he thought the flavour was, he said cherry. Cherry, I queried? On trying it a second time, I could see what he meant. Don’t ask me why.