The name of my blog might assume that I know what I’m doing when it comes to chocolate logs, even that I’m something of an expert. Well I’m not. My efforts at rolling  have been unsuccessful to say the least, as can be testified by my Liskeard Mess and the various other attempts I’ve made at a roulade. I’ve watched Mary Berry and any number of others do it and I’ve tried various techniques, but invariably my rolls crack hideously and have been known to disintegrate entirely. My least disastrous attempt was this Matcha Chocolate Roll.

Thus, when I was asked recently if I would make a chocolate log, my heart gave a little tremble. 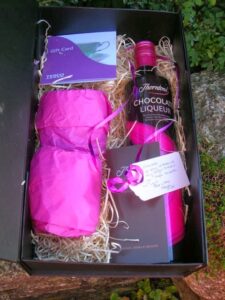 Now it just so happened that I was sent one of the most beautifully packaged parcels I’ve received in a long time. A sturdy but elegant black box contained a newly designed 70cl bottle of Thorntons Chocolate Liqueur, dressed in black and hot fuchsia pink. It was accompanied by two special Thorntons chocolate liqueur glasses wrapped in matching paper and a £10 supermarket voucher nestled in a bed of wood straw. The colour scheme was eye catching indeed and the presentation lifted my spirits – so to speak. The premise was to create a recipe using the liqueur. Ding! With chocolate logs very much on my brain, my first thought was to incorporate the liqueur into the ganache that I’d planned to fill my log with and the thought stuck.

But first, I had to try the chocolate liqueur. CT was not going to pass this opportunity up either. We had a glass over ice followed by a glass neat. We could have gone on, it was so moreish, but I had to apply the brakes before we became inebriated. Originally launched in 2011, this liqueur was developed by the Thorntons master chocolatier, Keith Hurdman; it is a vodka based drink with cream and West African cocoa. It’s hard to think of a better combination than cream, chocolate and alcohol and because vodka does not have a strong taste of its own, the chocolate and cream were allowed to speak for themselves. At 17% volume, this is quite a strong drink, so a little goes a long way. It wasn’t quite as dark or as rich as the Bailey’s Chocolat Luxe, but it was nevertheless delicious. And at £13.99, this is an affordable treat. 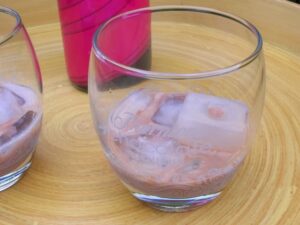 If you are able to restrain yourself from drinking this chocolate liqueur just as it is, there are any number of ways you could use it. The bottle came with a recipe card for various cocktails, drinks and desserts. I haven’t tried any of them yet, but I think I’m going to have to, as some of them sound very tempting indeed. With the cold weather now upon us, a hot chocolate with a slug of this could be just the thing after a bracing walk. How about a Thorntons Chocolatini or a Thorntons White Russian to indulge and delight your guests. As for the recipe for Thorntons Fondant, it has my name written all over it.

Well, maybe practice makes perfect, maybe I just got lucky or maybe the glass of Thornton’s liqueur I sipped whilst baking played its part. There were a few cracks, but the sponge held together and I was marginally pleased with the result. I was very pleased with the taste and texture of the chocolate log – thank goodness for neatened ends.

The whipped ganache containing Thorntons Chocolate Liqueur was, though I say it myself, sublime. It was light and moussy in texture with a rich chocolate flavour enhanced by the presence of the liqueur. It was a perfect match for the chocolate log and I’m now wondering why I’ve never tried anything like this before. The ganache is an ideal recipe for the festive season and could be used to fill any number of cakes and biscuits. I will most certainly be making it again.

As I was secretly, or maybe not so secretly, pleased with this chocolate log, especially the whipped dark boozy chocolate ganache, I’m using it as my entry for this month’s We Should Cocoa where alcohol is the special ingredient.

I am also submitting this to Lets Cook Christmas Party Food over at Simply Food.

Additionally, I’m sending this off to Javelin Warrior for his Made With Love Mondays.

It’s a very tricky letter that’s been picked for Alphabakes this month, but luckily it’s December so X for xmas is allowed. Hooray. I am thus sending my Xmas Chocolate Log to Ros of The More Than Occasional Baker and Caroline of Caroline Makes.

I’m sending the bottom photo off to No Croutons Required with Jac of Tinned Tomatoes who is looking for Festive Photos this month.

Well it doesn’t get more Christmassy than a Chocolate Log, especially a boozy one, so I am submitting this to Calendar Cakes where the theme this month is Jingle Bell Rocks. This event is co-hosted by DollyBakes and Laura Loves Cakes.

I was sent a bottle of Thorntons Chocolate Liqueur and a supermarket voucher in order to create a recipe. I was not required to write a positive review and as always, all opinions are my own.

Liskeard Mess – We Should Cocoa 9

Celebratory Layer Cakes, Gluten Free, We Should Cocoa | 15th May 2011 | By Choclette

After waiting for Blogger to fulfil its promise of restoring all posts and comments lost on Thursday, I’ve decided to move on and just hope they manage it at some point. So apologies to any of you who had left comments which have now disappeared. Hopefully, that was a temporary blip that won’t be repeated.

Oh my, oh my. There is no use trying to hide it, this was meant to be a roulade – a chocolate and lime curd roulade! My attempt at rolling the sponge was an unmitigated disaster. It was my turn for a sinking heart when I found out what Chele had chosen for this month’s We Should Cocoa challenge – to make a Swiss roll type cake. These are not my forte by any means. Out of the three roulades I’ve made, I have been slowly improving, but I seem to have regressed with this one: this is the worst I’ve done yet and just when I wanted to impress most too. There were a number of factors that contributed to the mess, chief amongst them being my limited patience. However, I think I undercooked the sponge a little and I just didn’t make enough of the mixture to fill the tin properly. I was trying to make a sponge that wasn’t too thick and therefore easier to roll – ha!

Luckily, where this has failed on the all important visual factor, it succeeded hugely on the even more important one of taste. Forget this as cake, it was a delicious and decadent dessert which CT and I mmmmd and ahhhd our way through with silly expressions of pleasure on our faces.

You may not want to emulate me here, but this is how I did it.

The cake was rich and squidgy and tasted divine. The creaminess of the mascarpone filling and the tartness of the lime were like yin and yang – creating a heavenly harmony and the ginger formed a subtle backdrop to the main event.

This creation was so delicious, I’ve decided to name it after my home town, Liskeard. Eton Mess is certainly yummy but why shouldn’t a modest market town in Cornwall have its very own culinary delight? Next time I’ll serve it in a glass – it might look better that way. After an unpromising start, I feel I’ve snatched a worthy victory from the jaws of disaster.