Back in January, I made my first foray into the world of chocolate and scones with these very tasty chocolate chip scones. Subsequently this lovely recipe, originally for Black Forest Scones, was sent to me by Jane Maile. Jane used to run a tearoom in the Cotswolds and these were one of the treats she regularly baked for her customers. In her own words:

So far these are probably my most unusual scones and cause some surprise which soon turns to ecstasy when they are tasted. Preferably warm from the oven they must be eaten with black cherry jam and lashings of clotted cream – a chocoholic’s delight!

Well it took me a while, but I did eventually get around to making them and coincidentally just in time for Celia’s International Scone Week.

I didn’t exactly follow the recipe and used watered down yogurt rather than milk and lemon juice. But the saddest omission was failing to use cherry jam to top the scones, I didn’t have any to hand, so Black Forest would have been a misnomer.

Jane warned that if these scones were too sticky, they would not rise and that extra flour may need to be added. Did I heed her? No. My scones did not rise as much as I’d hoped and they were a little moister than they should have been, but who likes dry scones anyway? And, more importantly, they tasted delicious, especially topped with lashings of clotted cream. I shall have to make these again when I have some cherry jam as I really don’t care to miss out on the ecstatic experience Jane describes. I will of course apply the jam first -tis the true Cornish way.

Who needs raisins in scones when you can have chocolate chips instead? These chocolate chip scones are moist and light with little bursts of rich chocolatey sweetness coming through in every bite. Excellent with clotted cream.

END_OF_DOCUMENT_TOKEN_TO_BE_REPLACED

Cheese Scones made with Greek Yoghurt 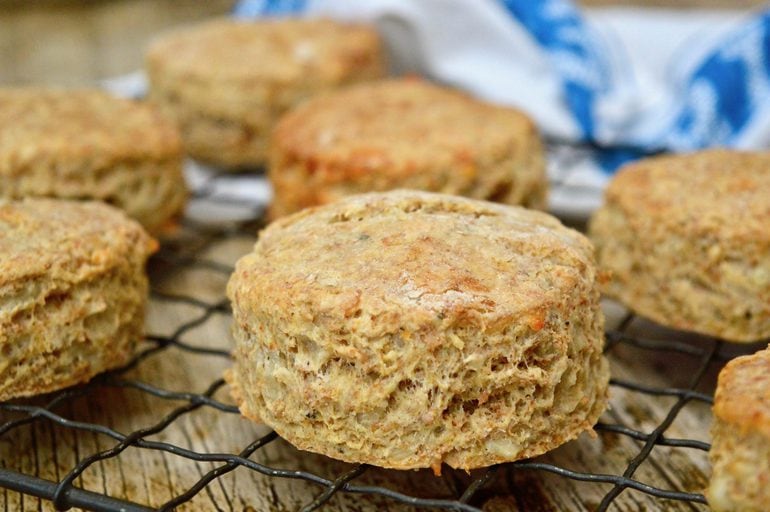 Cheese scones are one of CT’s favourite tea time treats, so I tend to make them quite a lot. I have to say I’m rather partial to them too. These ones are made with Greek yoghurt, which makes them extra light and even more delicious.