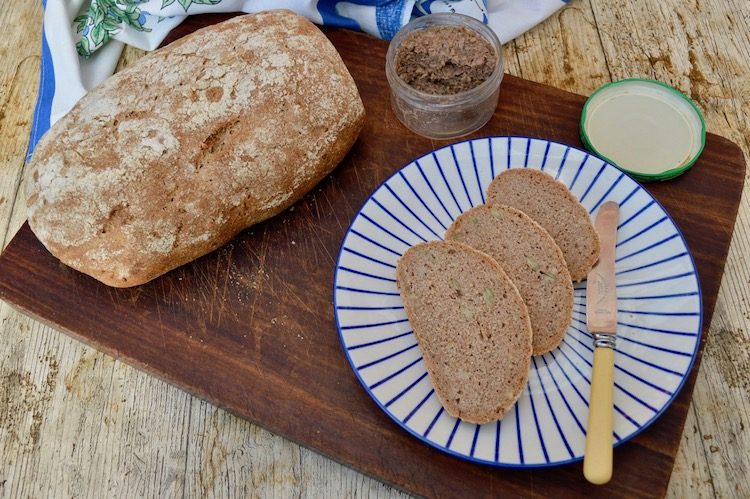 Sourdough bread has been made for thousands of years. It’s a much easier process than you might think. A rye starter is a particularly good one to have as it’s robust and will sit happily neglected at the back of the fridge for a while. Read on for a simple and full-proof recipe for making my version of rye sourdough bread. You’ll also find a number of variations as well as a method for making your own starter.

I rarely make the same rye sourdough bread twice, but I do generally use the basic method and quantities given here. It’s a recipe I’ve developed over the course of ten years. As yet, I’ve only had very positive comments from anyone who’s tried my bread.

My homemade loaf needs to be something I can fit easily into a busy life. So, once the starter is out of the way, this rye sourdough bread is incredibly easy to make. I pretty much just throw everything into a bowl and let my stand mixer do the hard work. I do no hand kneading at all. This not only saves me time, but creates a lot less mess in the kitchen too. But, if hand kneading is your thing, please don’t let me stop you. 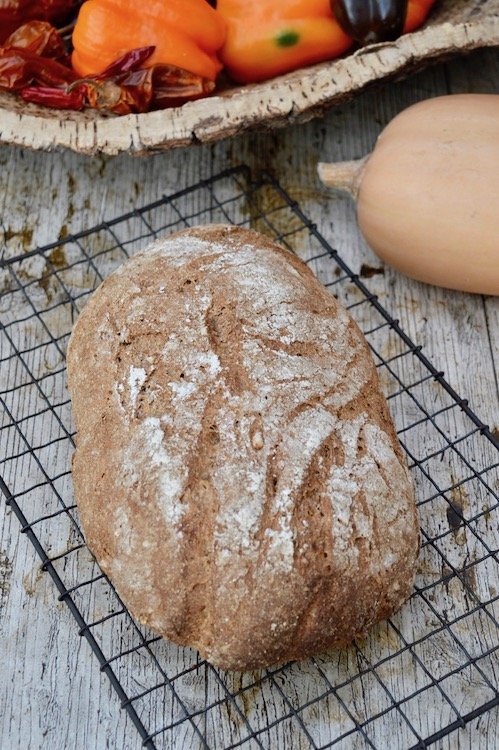 As I inferred above, I tend to use different flours when I bake this bread. It’s a very forgiving recipe. Sometimes, I add in other ingredients too, as I did for this apple and hazelnut spelt rye sourdough bread loaf. Mostly, I add a mix of seeds as I like to get a few added nutrients along with the beneficial compounds I already get from a well fermented sourdough loaf made with wholegrain flour. Scroll down the post to get some variations on the recipe. 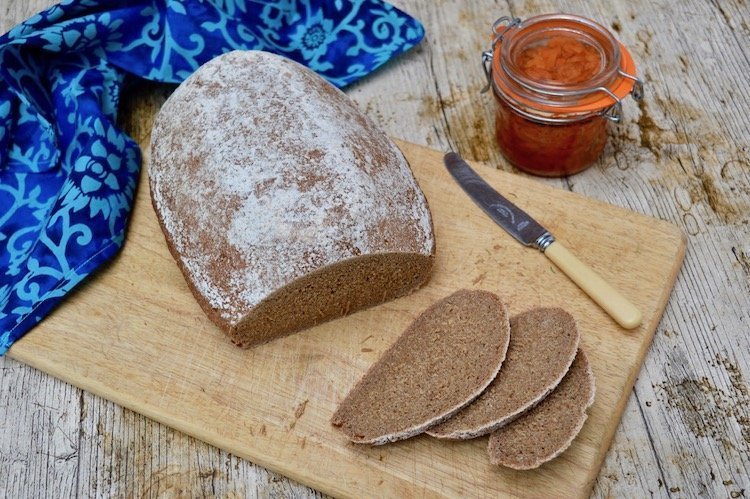 The finished rye sourdough loaf is my kind of bread. It’s sturdy enough for sandwiches, great for toast and it makes perfect croutons to top the lettuce & pea soup I posted last week.

Rye sourdough bread tends to be better the day after baking. As soon as mine has properly cooled down, I wrap it up and leave it for the following day. This has the added benefit of softening the crust.

Best Flours to Use

I like my bread to be as healthy as possible so I buy stoneground organic wholemeal flours. I’ve tried a few over the years, but the ones I keep coming back to are those from Bacheldre Mill. They are relatively easy to get hold of and perform well. I get mine from Waitrose, but they’re also available online.

I’ve had my rye sourdough starter for nigh on ten years now. It was almost the first thing I ensured I had with me when I moved to our new home ahead of CT. My sourdough has a history, which makes it even more exciting. Nearly ten years ago, I attended a three day bread course at Schumacher College with Andrew Whitley. It was fantastic and I loved every minute of it. Andrew quickly became my new hero. His rye sourdough was one he’d picked up in Russia in 1990. It was already at least thirty years old then. He gave us all some of it to take home. 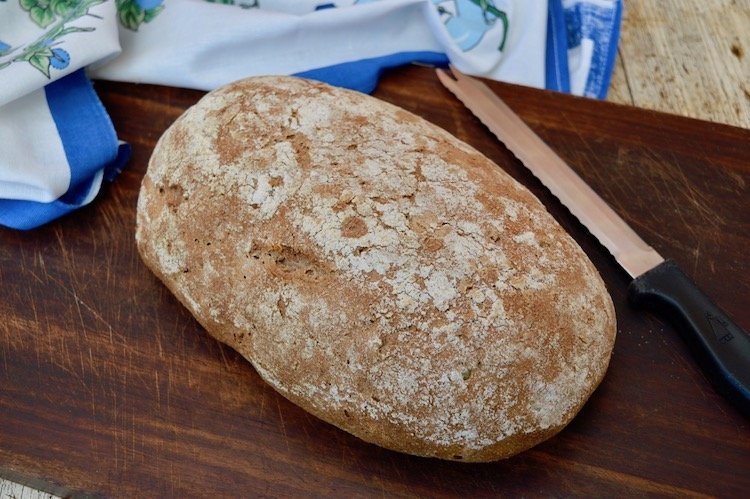 One of the best things about a rye sourdough is that it’s particularly robust and you can use whatever type of flour you like with it. As long as you only ever refresh the starter with rye flour, it’s good to go. Mine keeps well in the fridge for three weeks and I’ve been known to keep it for four without any problems.

The easiest way to start off with sourdough is to get a rye sourdough starter from someone who’s already got one. If you don’t have friends or family who make rye sourdough, you can buy one online. Bread Matters sell a dried version of the one I was originally given by Andrew. If, however, you’re determined to have a go at making your own, here’s how to do it.

How to Make Your Own Sourdough Starter

I’m not an expert on making sourdough starters from scratch, but I have done it successfully in the past. Here’s a basic guide on how to do it.

In a glass or ceramic bowl, mix 30g (1oz) of wholemeal rye flour with 30ml water. Cover the bowl with a plate and leave at room temperature for 24 hours. The next day mix in the same quantities. Repeat until you get to Day 5. Don’t worry if the mixture smells odd or even unpleasant to start with, it will take time to get going.

By this time your starter should be bubbling and smelling slightly sour, yeasty and possibly fruity. It’s now ready to use. If it’s not quite there, just stir and leave it for another 24 hours. If the mixture isn’t fermenting and bubbly by then, you may need to start again.

To the starter add half rye flour and half strong wholemeal flour. Also, 1 tbsp molasses and 1 tbsp caraway seeds. 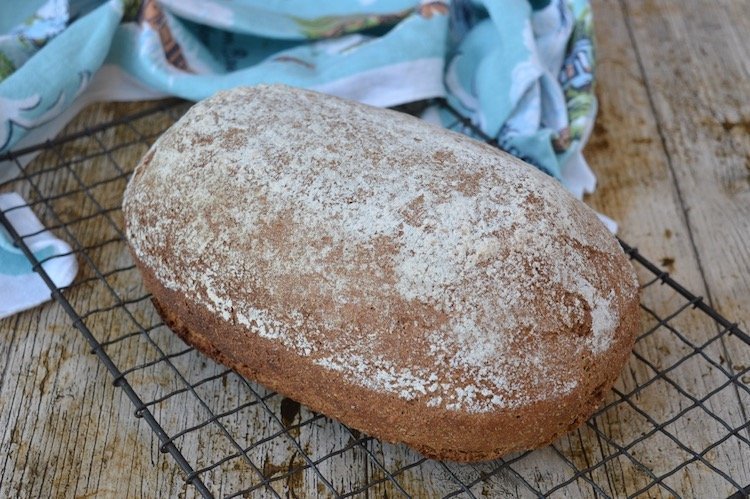 Use 100% wholemeal rye flour, with the caraway seeds. Produces a dense but sturdy loaf which works particularly well with bold flavours.

Add 100g mixed seeds when you add the flour and salt. I usually use a mix of linseeds, pumpkin seeds and sunflower seeds.

My favourite thing to have on bread or toast is probably Marmite, but I do ring the changes from time to time. Here are a few of the things I spread on my rye sourdough bread.

Thanks for visiting Tin and Thyme. If you make my rye sourdough bread or one of its variations, I’d love to hear about it in the comments below. Do share photos on your preferred social media site and use the hashtag #tinandthyme, so I can spot them. 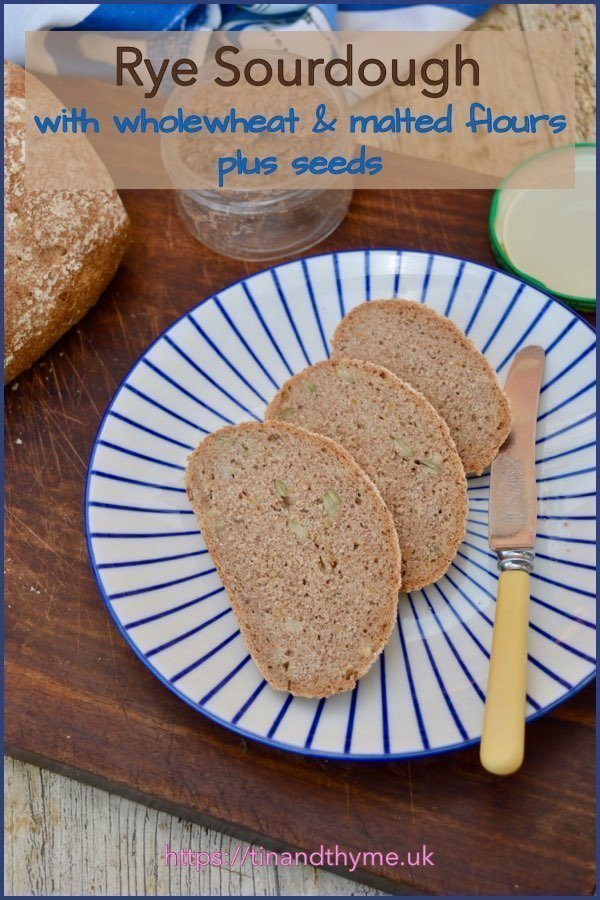 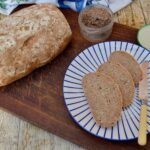 Rye sourdough bread tends to be better the day after baking. As soon as it's properly cooled down, wrap it up and leave for the following day. This has the added benefit of softening the crust.

I’m sharing this recipe for rye sourdough bread with Easy Peasy Foodie for #CookBlogShare. It also goes to Jo’s Kitchen Larder for #BakingCrumbs, and Casa Costello for #BakeOfTheWeek.

This post contains affiliate links to. Links are marked with an *. Buying through a link will not cost you any more, but I will get a small commission. Thanks to my readers for supporting the brands and organisations that help to keep Tin and Thyme blithe and blogging.