Stocking up with Chocolate

Reviewing products is a funny old game. Things can turn up at odd times and often not at all. So it’s often a complete surprise when I get a knock on the door and a parcel delivery; in such cases I generally have no idea what might be inside. It makes for an interesting life. Here’s some chocolate that turned up this month.

Brazil nuts are quite high in selenium which is said to keep the blues at bay; they are particularly welcome at this time of year when the days are short and often dull in our part of the Northern Hemisphere. To my mind, Christmas is not complete without a good box of chocolate covered Brazils – for medicinal purposes naturally. I am rather fond of these delightful nuts, especially when covered in chocolate. CT is even more fond of them and is unable to resist buying them from time to time – Christmas or no Christmas. So I was delighted to be sent some recently from Beech’s Fine Chocolates, just in time for Christmas.

These came in both 90g and 140g boxes of milk and dark chocolate. Interestingly the dark Brazils were of a more or less uniform size whereas the milk ranged hugely from really quite small to really quite large. We both tucked in eagerly. 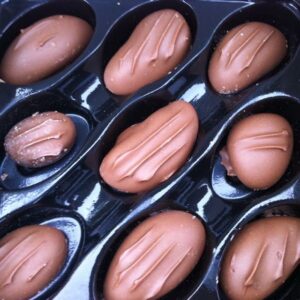 The nuts were nice and crisp and tasted fresh. Stale, rancid Brazil nuts can be a bit of a problem, but not in this case. The milk 33% chocolate was creamy but not overly sweet and went well with the slight bitterness of the nuts. There was a good contrast of textures with the smoothness of the chocolate and the crunchiness of the Brazils. We both really liked these and reckoned they were the best chocolate Brazils we had tasted for some time.

The dark 67% chocolate had a strong aromatic smell and the texture was crisp rather than creamy. The overall effect was quite different to the milk. They were also very tasty, but the nuts were not centre stage, as the dark chocolate had its own bitter notes that somewhat overpowered the flavour of the nut. They were, however, less sweet, which I generally find more palatable. That said, the milk chocolates were our favourite as the flavours were, we felt, better balanced.

Beech’s Fine Chocolates have been making traditional British chocolates in Preston since 1920. They pride themselves on using natural raw ingredients with no artificial colours or flavours. They have a string of ethical certifications including buying from UTZ farmers (better farming, better future) and a care for the environment. However, I noticed the Fairtrade logo was missing. They supply own-label chocolates for a number of high street retailers including Waitrose and Marks & Spencer as well as chocolates under their own brand.

A 260g box of chocolate Brazils costs £5.99 from their website, which seems eminently reasonable to me.

I do love beautifully packaged parcels and this one containing chocolate bars from Kinder was a particular joy to look at and unwrap. Subtle colours and pastel shades are not generally my bag, so a gold wrapped parcel covering a sturdy box containing something wrapped in orange tissue paper met with my approval. As it turned out, the Beuno bars nestling inside were similarly bedecked.

When the weather outside is frightful, Kinder colours are quite delightful: in the half light that passes for midday, I was glad to see some of that Italian sunshine, verve and elegance.

Nutella fans will adore these chocolate bars. Fingers of wafer layered with a smooth creamy hazelnut filling and covered with either white or milk chocolate. The chocolate, I’m glad to say, is real chocolate, containing cocoa butter rather than the ubiquitous vegetable fat found in many of our so-called chocolate bars. Each 43g packet comes with two fingers that are partially separated into four chunks. This is handy for portion control, but they are so very light, it is hard to stop at one finger let alone one chunk.

Strangely, although I’m not a fan of their antecedents Ferraro Rocher, I could quite happily polish off a finger or two of these Bueno with no problem at all. I like the contrasting textures of crunchy wafer and smooth creamy filling. The white chocolate has an additional texture, decorated as it is in a rough sandpaper like cocoa substance. Trust me, this is a lot better than it sounds. The bars have a delightful hazelnutty flavour, but are a little too sweet for me, especially the white chocolate one. Nevertheless, I was happy to munch my way through both.

Bueno is currently giving away 3 x £10,000 fashion collections. The winners will be whisked away to Banana Republic’s flagship store in London and given a personal shopper to help select just the right pieces. A makeover, spa treatments and various other delights are included in the prize. To enter, you need to open a bar and type in the code on the inner wrapper to see if it is a winner. To find out more visit the House of Bueno website or their Facebook page. 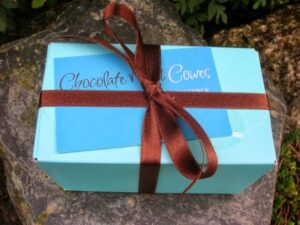 Following a Twitter conversation about the delights of chocolate salted caramels Chocolate Mad Cowes sent me a sample box of their artisan caramel chocolates. Once again, these were nicely packaged; I can’t resist a bonny turquoise box tied with ribbon. Are you listening CT?
As their name suggests, this chocolate shop is based in the international yachting centre of Cowes on the Isle of Wight. I don’t know whether these came over on a yacht, but they were a little bit scattered and scuffed on arrival. No matter, ultimately, it’s all in the taste.

As regular readers will know, good salted caramels are my Achilles heel – I would eat them anywhere at any time. Luckily motive and opportunity rarely coincide. I was, however, looking forward to trying the selection offered. I was pleased to see an interesting variety with centres that were chewy, soft and almost liquid. The caramels were covered in Valrhona dark and milk chocolate. Both CT and I enjoyed all of these, but thought the plain chocolate ones had the edge as they helped to counteract the sweetness of the caramel. 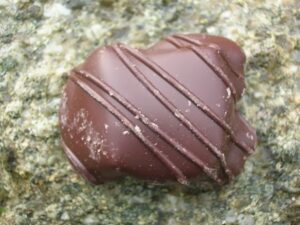 Plain Chocolate Pecan Turtles – the soft, but not runny caramel had a good rich flavour with the toffee note coming through almost immediately. It was not too sweet and the pecans’ bitter hints were both a good flavour foil and produced a contrasting crunchy texture. 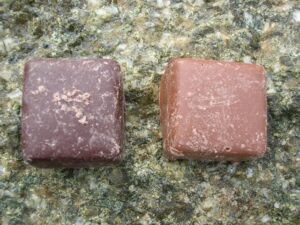 Salt Caramel Bouchees – These squares of salty milk and dark chocolate were firmer, chewier and sweeter than the turtles, but still quite toothsome. 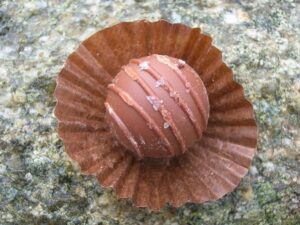 Salt Caramel Spheres – the most liquid of the lot, these were my favourite. They were not too sweet and had a hint of the sea about them. Perfectly smooth, these work worked well with the plain and milk chocolate.  CT thought he detected oaky tannins that reminded him of whisky.
0
Shares
Share  on Facebook  Share  on Twitter