Linen Tea Towels and a Giveaway #6

When asked by Al McCavery of All Tea Towels if I’d like to review a couple of tea towels from the site, I was really pleased. I love a good tea towel and especially nice colourful ones that look decorative when not in use. There are plenty to choose from. Whether it’s a particular theme or colour that is wanted, chances are you will be in luck. There is even a food and drink category, although sadly, I couldn’t find any chocolate related ones.

I did find plenty of red tea towels though. Red is my colour of choice for all kitchen related paraphernalia. Making a choice of only two was actually quite difficult. Colour and design were two factors to be considered. Material was another – linen, plain cotton or waffle? In the end I chose two Irish linen tea towels, partly because I liked the designs and partly because they were linen. Linen is purported to be the best material for tea towels as it is absorbent, lint free and durable. It also has a touch of elegance and class about it, which my kitchen is very much in need of. 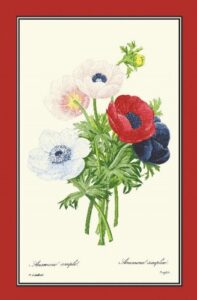 I’d chosen an anemone design for myself – a Pierre-Joseph Redoute print. Anemones are some of my favourite flowers and as well as featuring a large red anemone, there is a thick red border too. The second one is a Madeleine Floyd design featuring garden birds, their song and their eggs; this one is destined for my mother. She loves to watch the birds in her garden and try and identify their calls and it has a blue border which matches her aga.

Linen has a long and venerable history. Made from the flax plant, Linum usitatissimum, it is thought to be one of the first plants used to make fabric in about 8000BC. It was brought to prominence by the ancient Egyptians in about 4000 BC. Although linen had been grown in Ireland from around 1000BC, it did not become widely used until the Middle Ages. Although cotton and in more recent times, artificial fibres have come to dominate the market, there is still, thankfully, a place for the production and use of linen in our modern world. 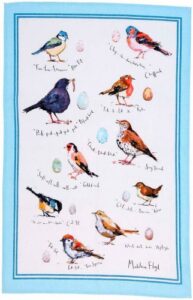 An added bonus, in my book at least, is that these tea towels are sent by Royal Mail. Despite the doom and gloom surrounding this venerable institution, I like to see it supported. A parcel very quickly arrived and the tea towels were extracted from their packaging. As an aside, they were wrapped in turquoise tissue paper and as I am partial to colourful tissue paper, I awarded another bonus point.

Both were a good couple of inches bigger in either direction than some of my existing tea towels and measure 48cm by 74cm.

The weave was more open than I’d expected and the linen nice and crisp. They are of course, colour fast and machine washable. The washing instructions say it takes a few washes to get a really absorbent cloth. I haven’t washed either of them yet, but I did test one out and I was really quite impressed with how much water it absorbed and how well it dried the mugs and glasses leaving them sparkling and smear free. I’m wondering if they really can get even better.

Al has kindly agreed to give a linen tea towel away to one of my UK readers. Being as it’s spring and rather a wet one at that, I’ve chosen a nice cheery yellow. Appropriately entitled Spring Season Tree of Life, the trunk and branches have words associated with belonging and positive emotion written along them. I very nearly chose this one for myself.

To enter the giveaway, you must leave a comment at the bottom of this post answering the question below. You have until midnight of Wednesday 9th May 2012 when the giveaway closes. The winner will be randomly selected after this date. Once again, apologies to oversees visitors, but this is only open to those with a UK postal address.

What would be your ideal tea towel design or colour?

Additional entries can also be made by doing any of the following and letting me know by leaving a separate comment for each method used. BUT you must answer the question above for these to be eligible:

10 May Update. This giveaway is now closed. The winner has been drawn using Random.Org as follows: no. 29 – Baking Addict