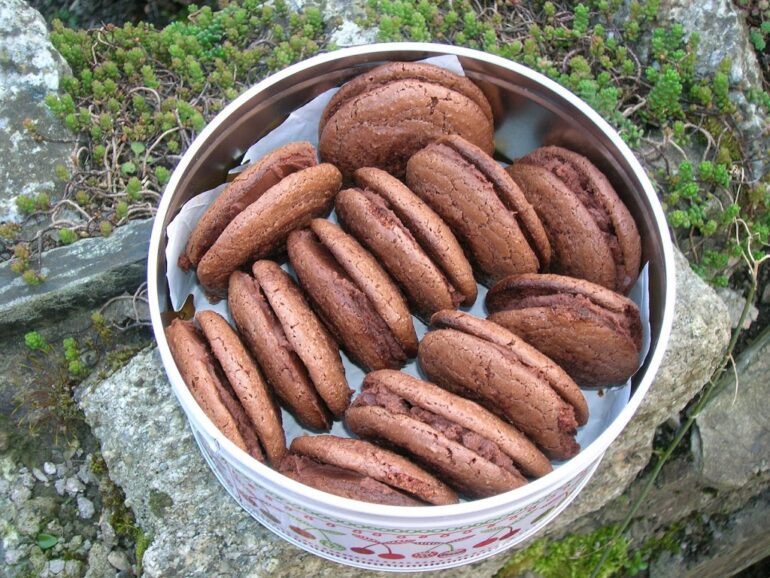 Well I messed up good and proper on this one, in all senses of the word! First off, I thought I’d be organised and get CT to pick my next Random Recipe Challenge well in advance, so I could plan the best time to do it. THEN Dom went and changed the rules. We were meant to choose book number 18 (not that I have 18 chocolate books to choose from I might add, not yet anyway). Note to self – wait until a challenge is actually issued before going ahead with it. Sorry Dom, I’m hoping that you won’t disqualify me.

Second off, I followed the same routine as last time and CT picked chocolate macaroons from Unwrapped. Aaaaah, macaroons!  Fiddly, faffy food is not my forte (alliteration might be). This was going to be a real challenge for me and I knew I had to put some serious time aside for it. My mother was having her somewhat delayed Christmas dinner which is always a wondrous affair of Goose (mock goose for me) and the best Christmas pudding ever. So, I thought perhaps these would be just the thing to show off and impress everyone after dinner – hummmm.

Thirdly, I tried really hard to follow the recipe and instructions for this, but still came out with macaroons that were unevenly sized and looked nothing like the elegant macaroons I keep seeing on everyone else’s blogs. Fourthly, this was the first time I’d tried using the piping bag that CT gave me for Christmas. Well, I knew there was a reason I had been putting this off and this was duly confirmed; I got more of the mixture over myself, the outside of the bag and the worktop than I did inside the actual bag. I found it fiddly, faffy and frustrating AND I broke the bag.

Fifthly, the ganache split, grrrr – why didn’t I follow Marc Demarquette’s recipe which had worked so well in the lemon balm ganache I made last year?

This is how I went about it: 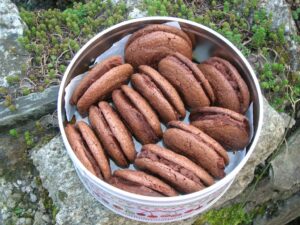 Fiddly and faffy these may have been to make, but oh my, they were good. They may not have looked like those elegant French macarons, but they were crisp on the outside and chewy in the middle. Because I’d used such a dark chocolate, the ganache wasn’t at all sweet despite the icing sugar. Both the texture and sweetness of the ganache were a good contrast to the sweet and really delicious macaroons.  And they all held together perfectly.
CT went off on a trip of free association and came up with the following: luxurious – decedent – our very own le manoir – hot stone massage &amp Jacuzzi (he may have been suffering from a theobromine overdose at this point) – rich – unctuous – not too sweet – combines well with the – don’t want to rush – want to chew – chocolate hit (see what I mean?).

Despite everyone leaving the dinner table groaning and holding their bellies, most managed to enjoy a macaroon with coffee and those that didn’t got to take one home with them. Luckily, CT was very well behaved and kept his opinions to himself!