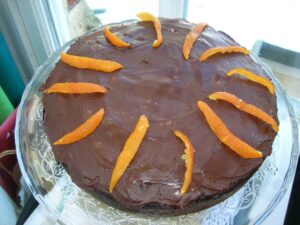 Tis the season to be jolly, tra la la la la ….. and all that. I chose dates for the December challenge because they seemed suitably festive, but oh what to make? Should I stuff madjool dates with walnuts and dip them in chocolate, make a cake, biscuits, cupcakes or those wonderful date slices I’ve been coveting since first seeing them on Suelle’s blog?  I know, I’ll make all of those – hmmmm.  Reality set in and I realised I had very few non working days before Christmas and rather too much to do. So, I’ve gone for a cake and if I have time I might have a go at some of the others.

Again, it was a cake I’d seen on Mainly Baking that inspired this one, Dan Lepard’s Hazenut Prune Cake.  I was initially going to substitute the dates for the prunes and try and follow the recipe to the letter.  As it happened, I had some walnuts that really needed using up, so it turned into something different again.  I substituted the nutmeg for mace and added some orange for an extra festive note.  The mix itself, I found rather too dry, so I also added some orange juice.  Having made some candied orange peel, which I will blog about at some future date, I had quite a bit of orange syrup going free to a good home – a good home was found. And finally, I wanted to make the cake more chocolatey, it is after all a chocolate challenge – a datey chocolate ganache found its way onto the top of the cake. So once again, my version bares little resemblance to the original, but it’s the inspiration that counts. I’ll stop this stream of consciousness now and get on with the recipe.

Wishing you all a very Merry Christmas and Happy Holidays.


PS – this cake was not only moist and very tasty but kept well for weeks.
Previous Post: « Chestnut Brownies: Dense, Dark and Delicious
Next Post: Christmas with Dan’s Date and Hazelnut Bars »