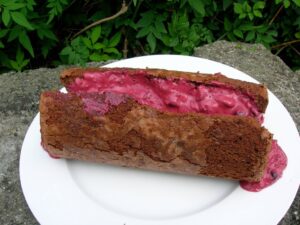 My posts have got a bit out of sync lately and I actually made this a month ago.

Hey ho, the picture I had in my head before making this roll, was very different to the one it actually turned out to be! You’ve heard of Eton Mess, now look as the mess I made. After the last one I attempted, I tried to be more careful, but it turned out to be even more of a disaster than the first one. I was impressed by the Jam Roll Celia made recently, which looked so good and so perfectly formed. When my mother turned up with a bowl of blackcurrants from her garden I knew exactly what I wanted to make with them. I had thought maybe the Christmas roulade didn’t roll well because it was too thick, so I made a different recipe and used less ingredients to make a thinner version – that was the plan anyway! The sponge actually rose really well and turned out to be nearly as thick as my first attempt.

This is what I did

Luckily, despite the less than perfect roll, it tasted pretty damn good. CT and I tucked into it not long after it my rolling fiasco and pronounced it delicious. The sponge fragments had soaked up the blackcurrant cream and the fruity hit was strong. The big question is, do I bother trying to do one of these rolls again or do I just give up now?
Previous Post: « Chocrhutea – Matcha, Chocolate and Rhubarb Marble Cake
Next Post: Chocolate Courgette Cupcakes – Vegan »